With manager on hot seat, Dodgers get victory

With manager on hot seat, Dodgers get victory 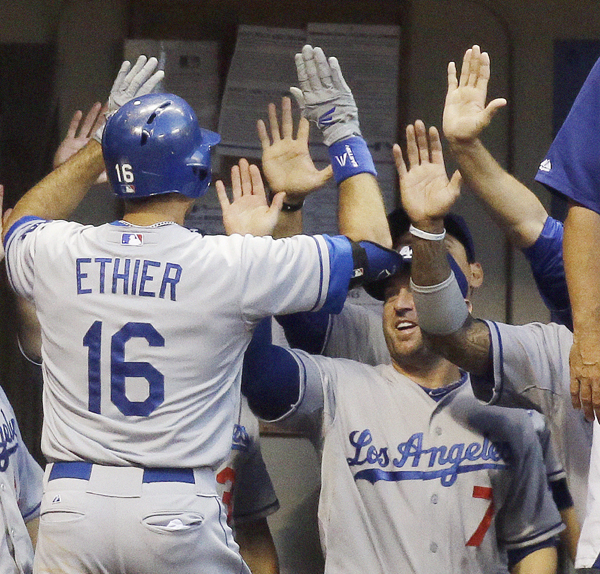 Los Angeles Dodgers’ Andre Ethier is congratulated after hitting a home run against the Milwaukee Brewers Monday, in Milwaukee. [AP/NEWSIS]

MILWAUKEE - Beleaguered manager Don Mattingly insisted Monday he doesn’t feel he’s about to be fired by the Los Angeles Dodgers, and he has no idea whether he needs to win a three-game series against the Milwaukee Brewers to keep his job.

Mattingly’s comments came an hour after GM Ned Colletti said his manager is “doing fine” and has kept the team steady despite its last-place showing in the NL West.

Mattingly said he talked with the team president, Stan Kasten, within the past couple of days and didn’t get any indication he was about to be replaced. “As far as any kind of rumors or whatever they are, I talked to Stan the other day. He didn’t fire me that day,” Mattingly said. “I’m still here. Ned didn’t tell me I wasn’t going to be here tomorrow or today. That’s the way I look at it.”

There has been plenty of speculation that Mattingly’s job is in jeopardy. The Dodgers entered Monday night’s game in Milwaukee with a 17-25 record despite a $215 million payroll.

Clayton Kershaw scattered three singles in his second complete game of the year and Matt Kemp hit his first home run since April 24, lifting the Dodgers to a 3-1 victory over the Milwaukee Brewers on Monday night.

“Every time I get in trouble, Kersh saves me,” Mattingly joked. “One more day.”

Ryan Braun managed a pair of singles and Yuniesky Betancourt also singled for the only hits off Kershaw (5-2). The lefty struck out five and walked one.

“We obviously hear the stuff that’s going around,” Kershaw said about the speculation. “I don’t think we need any extra added motivation to play better, but we want to do well for Donnie.

“We’ve always wanted to play well,” he said. “He’s a great manager and a great person, and we know it’s up to us. He can’t go out there and play.”

Mattingly said he was concentrating on finding ways for his team to play better, and said the stars on the club would have to perform well for the Dodgers to win.

“You know what? I don’t even worry about that part of it,” he said. “I only worry about turning it around. Really, I never get away from my base. All I worry about is us playing our best baseball. And I worry about our team, and getting us to perform up to the best of our ability, and try to keep the team going in a position to have success.”

Yovani Gallardo (3-4) gave up three runs, including two homers, in six innings. He lost his third consecutive start and the reeling Brewers have dropped 15 of 18 games.