KT’s World IT Show offers window to the future

KT’s World IT Show offers window to the future 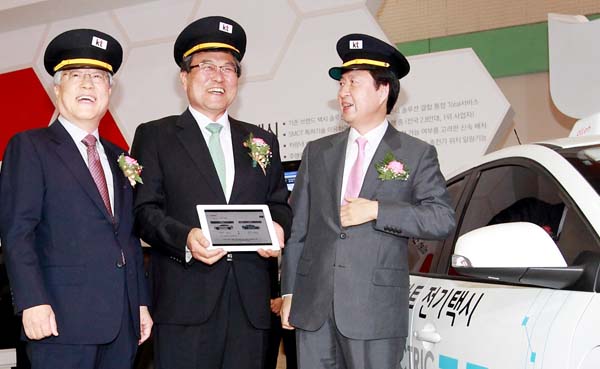 As the World IT Show 2013 began yesterday, KT joined some 442 companies from across the world in presenting its latest technology. For the company, this year’s main themes are environmental preservation and mutual development as innovative means of sustainable growth.

First launched in 2008, the show has been a window through which participating companies have revealed their most up-to-date media content, mobile applications and platforms. The company puts the aspiration of making the world a better place to live into a hexagonal booth, which symbolizes balance and harmony. Minister of Science, ICT and Future Planning Choi Mun-kee also visited the site and experienced the present and future of the IT industry. A white electric taxi is drawing attention as a potential public transportation option. Not only convenient but also ecofriendly, Olleh smart electric taxi features a control service that allows users to track the current location of a vehicle along with mileage and speed. It also manages ride requests, vehicle allocation and power charges. Visitors at the event can operate and charge the cars to envision a more convenient future. The new technology relies on the mobile communication technology patented by KT. It is a data exchange technology that uses voice circuits, not the data packet network. Rather than IP addresses, users can access the server with their phone numbers.

Smartphone games such as Big Fish 2 and Codex the Warrior are great examples of the company’s mutual development strategy. The creator of the latter, Devclan, was born at KT’s mobile application developer support center and later completed the 3-D action game after intensive training from the conglomerate’s outstanding start-up support program. Fans are already looking forward to its release sometime this year. Visitors to the Partners Zone, which features various projects emblematic of mutual growth, can enjoy a taste prior to the launch.

The famous commercial song by Akdong Musician, winning team of SBS’s “K-pop Star 2,” captures people’s eyes and ears in another section, the All-IP Zone. Visitors are welcome to try out the company’s All-IP technology products such as Olleh TV and Smart Home HD Phone, which enable different smart devices to stay connected via IP signals so that content appears more vividly and can be shared in high definition without lag.

An additional focus for KT is promoting the importance of virtual goods, which the company believes form a newly emerging growth engine for information and communications technology. Related products include Ustream, an international virtual goods platform that enables worldwide broadcasting using only a computer and smart device. It will livecast the entire IT show via “visible radio.”

Visitors can also play with Genie, a mobile application that is already familiar to them as another leading platform for virtual music content. People are able to vote for their favorite songs and see the results in real time. Subscriptions to entertainment magazines are also available. In addition, other smart services have taken a step closer to the public. Promoted services include educational products such as Kibot 2 and a virtual library for e-books as well as a mobile financial service application that compiles membership cards, payment methods and gift certificates.