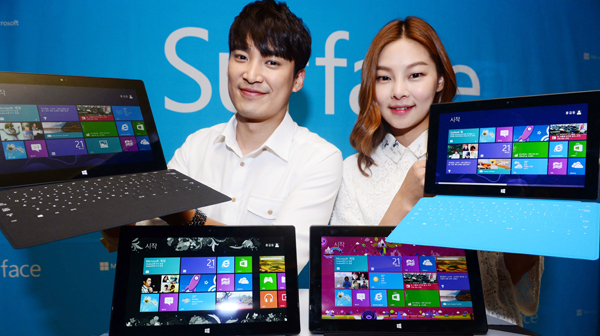 Microsoft Korea introduced the Surface tablet PC in Korea yesterday, almost a year behind the initial global unveiling in June. Preorders begin today and in-store sales are scheduled to start on June 11. Provided by the company

Microsoft Korea launched its Surface tablet PC here yesterday, months behind other markets around the globe.

The 10.6-inch Surface, which combines elements of a PC and a tablet, is expected to compete against the Samsung Electronics ATIV Smart PC and comes in two models depending on operating system: Windows RT or Windows 8 Pro. The former uses an ARM CPU, while the latter is equipped with an Intel CPU.

Microsoft executives blamed the long delay of the release on the “complicated and fastidious customs procedures that any foreign electronic gadget has to go through.”

Before Korea, the gadget entered the market in some 40 countries. Surface was unveiled as a prototype in June in the United States and sales of Surface RT, a cheaper model, began at home and in some other countries in October in tandem with the launch of the latest Windows 8 operating system. The more expensive Surface Pro was launched in early February.

The start of sales in the country comes amid rumors that Microsoft is planning to reveal an improved version of the Surface at the Microsoft Build Developer Conference slated for June 26-28 alongside an announcement about the Windows 8.1 upgrade.

But Kim Hyun-jung, head of marketing operations at Microsoft Korea, declined to confirm any speculation about the potential next-generation Surface. She also refused to offer sales goals for the new tablet in Korea.

A combined 900,000 units of Surface Pro and Surface RT tablets were shipped during the first quarter, according to market researcher IDC, placing the Microsoft gadget at fifth place among tablet PCs with a market share of 1.8 percent. Apple, Samsung, Asus and Amazon are the four top players.

Surface’s retail price ranges from 620,000 won ($558) to 1.22 million won depending on storage capacity options between 32 gigabytes and 128 gigabytes. At Amazon.com, the price starts at $499, about $60 cheaper than in Korea, and can be as much as $1,036. Preorders will be accepted at 327 Lotte Hi-Mart stores across the country and at the retailer’s home page starting today. In-store sales will begin on June 11.