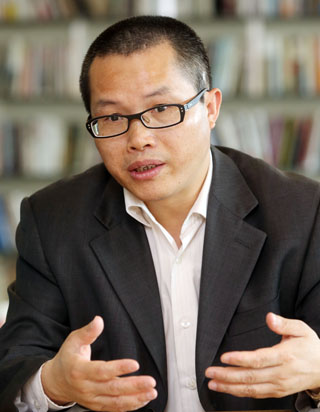 Deng Yuwen, 45, former deputy editor of Study Times, a weekly journal of the Central Party School of the Communist Party of China, said in an interview that Beijing should forge a new relationship with Pyongyang, and unification of the Korean Peninsula would be beneficial.

Deng was fired in February from the journal after he wrote a controversial article in the British paper, The Financial Times, that said China should abandon its ally North Korea.

His Feb. 27 article stated that China’s strategic alliance with North Korea “as a geopolitical ally” was “outdated” and that Pyongyang could turn its nuclear weapons program against Beijing.

Though he lost his job as editor, Deng told the JoongAng Ilbo in an interview at its headquarters in central Seoul, “I will make a living through writing,” ahead of a symposium Tuesday on “North Korea’s nuclear problem and China’s policy on the Korean Peninsula.”

Q. It’s been over a year since Kim Jong-un became the leader of North Korea, but he has not visited China yet. Why do you think that is?

A. It’s because China has been refusing [to meet with the North Korean leader]. China sees that as long as Kim Jong-un ignores China’s advice to discard its nuclear weapons, visiting will be meaningless. Allowing him to visit China will create a negative impression that it supports North Korea.

How do you evaluate the current relationship between China and North Korea?

There are two reasons. First, North Korea’s third nuclear test was the final straw testing Beijing’s tolerance. The other reason is that it appears the U.S. guaranteed some sort of deal with China. Even if North Korea wants to have dialogue with the U.S. and tries to lean on the U.S., using its nuclear weapons as bait, it appears that the U.S. agreed to refuse [North Korea’s advances].

Isn’t China worried that North Korea will take the U.S. side?

There is no need to worry. There is a small chance that the U.S. will accept them. If the U.S. chooses to besiege China using North Korea, this will raise strong retaliation from China. From the perspective of the United States, it would be incurring a great loss for a small profit. Also how can the U.S. convince its people to accept the North’s dictatorship? Because North Korea is a bankrupt government, maintaining it will require a tremendous amount of money.

It has not fundamentally changed yet, but there is a possibility that it will change. For now, China’s North Korea policy is like a diagnosis of a traditional Chinese medicine practitioner. The idea is to nip the illness from its roots for the long term. But recently, China’s participation in the sanctions is like an allopathic treatment by Western medicine, treating the illness by using counteractive methods. As North Korea makes trouble, the treatment would first correct the more immediate behavior. China currently is keeping as its main principle traditional medicine, but supplementing it with Western medicine. However, if North Korea conducts a fourth nuclear test, Western medicine will become its fundamental approach.

If China cuts off its food and crude oil supply to North Korea, wouldn’t the North Korea issue become resolved in a simple manner?

There still are more Chinese scholars that purport that China has to support North Korea. There are two main reasons. The first is a strategic consideration to keep in check the U.S. from intervention in Asia. Next is if North Korea suddenly collapses, South Korea of course, China and other neighboring countries all will be burdened.

Is there a chance for North Korea to reform and open up like China?

Chances are very low. Unless North Korea gives up its nuclear program, it will not be able to receive aid from the international community, hence it will not be able to open up. North Korea for a long time practiced a military-first policy, so the military is the top interest group. To open up the North Korean economy will endanger the army’s interests and weaken its loyalty to Kim Jong-un. To maintain the army’s loyalty and open up North Korea, the army has to be dissolved. It is the same as the beginning stages of China’s opening up. But this will decrease the fighting power of the army. Furthermore, China in the past before its Internet was developed in 1989 underwent a large-scale protest [Tiananmen Square massacre]. If North Korea opens up, it will face a large protest.

Do you think unification of the Korean Peninsula should happen under the leadership of South Korea?

The North Korean government will soon collapse and become a failed government. China has to actively cooperate with South Korea and expedite the unification process on the peninsula. There are four points. First, China, through aiding South Korea and achieving unification, will not earn the animosity of the people, so China can retain its interests in the Korean Peninsula. Second, it will be useful in disintegrating the South Korea-U.S.-Japan strategic partnership. Third, this will help improve China’s negative image for supporting North Korea for a long time. Last, China has poured an astronomical amount of money into trying to maintain the North Korea government, and if unification is achieved, it will not have to do so any longer.

What can China do for the unification of the Korean Peninsula?

Do you ignore the neighboring countries’ position regarding reunification of the Korean Peninsula?

The best thing is for China to have secret negotiations with South Korea and the U.S. The precondition would be after unification, the denuclearization of the Korean Peninsula and the withdrawal of U.S. troops. Also, to lessen the resistance of the North Korean government, if they want, Kim’s family and leaders should be granted asylum from China.

President Park Geun-hye next month will visit China. What kind of talks will she have with President Xi Jinping regarding the solution to the North’s nuclear program?

South Korea has to explain carefully to China why a solution to the nuclear problem is good for Seoul but also how helpful it will be to Beijing. It is good to take note that Xi Jinping to those with a soft temperament is also soft but never bends to opponents who are aggressive.