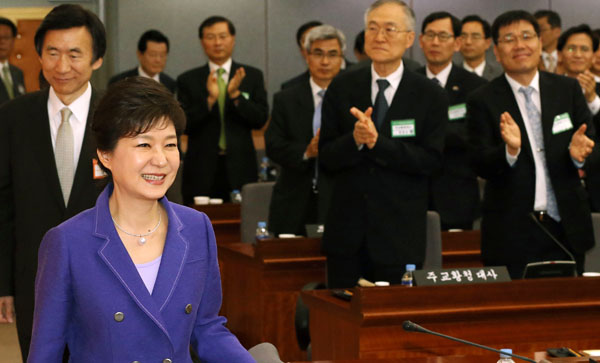 President Park Geun-hye yesterday attended the annual conference of Korea’s top diplomats and promoted her vision of establishing a global network of Koreans living around the world.

“The new government has shifted its paradigm from the country to its people,” Park said yesterday at the meeting of the chiefs of Korea’s overseas diplomatic missions. “To this end, each diplomatic mission must carry out policies tailor-made to the different needs of residents in each country and play the role of a spearhead promoting our new foreign policy.”

She especially urged the consulates to pay attention to properly handle the difficulties that 7.2 million Koreans living overseas, 150,000 students abroad and 13 million tourists face every day during their stays in foreign countries.

At the meeting, Park also told the diplomats to tighten their ethics and discipline to make sure they won’t be involved in any disgraceful incidents. Park’s otherwise successful trip to the United States was tainted by an unsavory sexual scandal involving her spokesman, Yoon Chang-jung, despite her ambitious plan to promote her visions for a global Korean network and North Korea policy.

In her meeting with the 122 chiefs of Korea’s overseas diplomatic missions, Park also issued yet another strong message to North Korea.

“We must make North Korea realize that keeping nuclear arms and developing its economy at the same time is an impossible fantasy,” Park said. “The international community must send a stern, consistent message to the North and your role is crucial to this end.”

The annual conference, which began on Monday and ends on Friday, was Park’s first meeting with the top diplomats. It was intended to share her governance vision and reflect it with diplomacy.

Discussions sessions, lectures, site inspections and a meeting with the business community are all included in the program.

At the conference, Park also urged the top envoys to promote her foreign policy to their host nations.

“It is crucial to secure many countries’ cooperation for establishing the foundation of peaceful unification of the Korean Peninsula,” Park said. “You should prepare necessary materials and promote the new government’s philosophy to your host nations.”

She said the diplomatic missions must take a leading role in winning support of the international community for her vision of building trust between the two Koreas, known as the Korean Peninsula trust process, and the Northeast Asia peace and cooperation initiative, also known as the Seoul process.

Before the meeting took place yesterday, a Blue House official told the JoongAng Ilbo that the main agenda for the meeting will be promoting Park’s vision of establishing the global Korean network and increasing Korea’s official development assistance.

On the first day of the conference, Foreign Minister Yun Byung-se already explained the direction of the Park administration’s foreign policy to the diplomats.

They also held a discussion session on Monday to strengthen the global Korean network by improving consular services and Korean language education programs.

During her trip to the United States, Park has already made clear her plan to more actively engage more than 7.2 million Koreans living around the world and utilizing their talents.

Throughout her stay, Park hosted three meetings with Koreans living in New York, Washington and Los Angeles and expressed her strong affection for them.

Ahead of a meeting with top diplomats, Park also told her senior presidential secretaries on Monday to follow up with her promise made during the U.S. trip to provide more opportunities to overseas Koreans at home and strengthen the government’s assistance for them. During her meeting with Korean residents in the United States, she promised to remove obstacles that hinder their activities in Korea.

“I have promised during my U.S. trip to issue the overseas Koreans’ resident identification cards,” Park said yesterday. “I also promised to expand the global Korean network and support the Korean language and history education for them. You must consult with relevant ministries to come up with plans to follow through with the promises.”

Park also stressed especially hard that overseas Koreans have strongly complained over the missions’ lukewarm treatments on attending to difficulties in foreign countries, while making it the top priority to receive dignitaries from Korea, said the presidential spokeswoman Kim Haing. Park asked the diplomats not to be mistaken about their duty and work hard to serve the overseas Koreans.

The agenda is a clear shift from her predecessor Lee Myung-bak, whose goal was themed on marketing Korea as well as energy and resources diplomacy.

Lee had invited business leaders to his first meeting with chiefs of diplomatic missions and arranged counseling sessions with the diplomats.