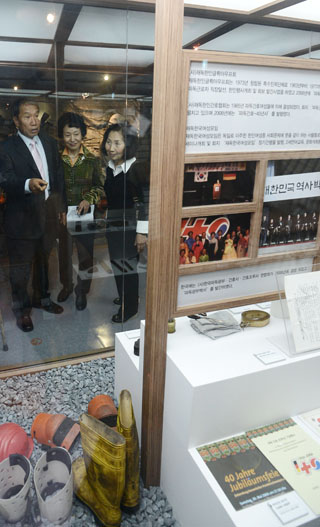 A group of people, who were dispatched by the government to Germany to earn foreign currency in the 1960s and ’70s, visits a memorial hall that opened yesterday in Yangjae-dong, southern Seoul. The four-story memorial, funded by the Human Resources Development Service and the Ministry of Employment and Labor, is dedicated to such workers and also meant to mark the 130th anniversary of diplomatic ties with Germany and the 50th year since the guest workers were first dispatched. The number of workers is estimated to be around 18,000. Most worked as nurses and mine workers during the poverty-stricken era. [NEWSIS]