Japanese back Korea’s sovereignty over Dokdo

Japanese back Korea’s sovereignty over Dokdo 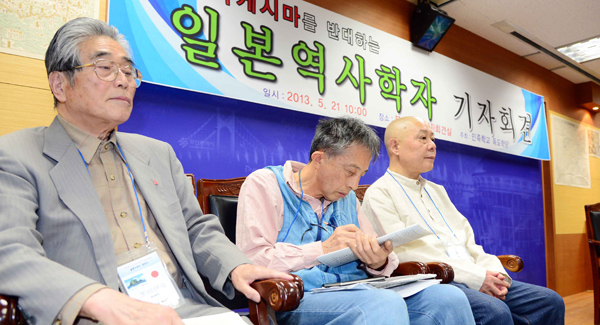 A group of Japanese historians holds a press conference yesterday at Busan City Hall to back Korea’s sovereignty over the Dokdo islets and also express their concerns about resurgent right-wing extremism in Japanese politics. [NEWSIS]

A group of Japanese historians backed Korea’s sovereignty over the Dokdo islets and also expressed their concerns about resurgent right-wing extremism in Japanese politics.

In April, a volunteer group was formed in Japan by historians, religious figures and activists, and it calls itself “A Civic Group Protesting Takeshima” which is the name Japan uses for Dokdo.

The group was invited to visit Korea by the Dokdo School, a Korean civic group based in Busan, and the visitors held a press conference in Busan City Hall yesterday.

“We see the matter of Dokdo not as a territorial dispute but as a historical issue,” Kuboi said at the press meeting. “We agree to reconsider the Shimane Prefecture [government]’s plan to designate a Dokdo Day.”

The four brought two old Japanese maps and other materials to prove their claim.

“This map was crafted by a person named Nagakubo in 1775 and retouched by the Japanese feudal government,” Kuboi said.

“In the early version of the map, it describes Dokdo and Ulleung islands as Japanese territory, but in 1875, the Japanese government revised the map, describing the two islands as belonging to Korea’s Joseon Dynasty.”

The four expressed concerns over Japan’s far-right politicians and extremists.

Today, the four will visit Dokdo along with about 10 foreign students studying in Korea to demonstrate Korea’s control and claim over the islets. Japanese activists haven’t been allowed to visit them before.

“We wanted to show that while there are extreme right-wing political leaders in Japan, there are also some conscientious intellectuals and citizens,” Kim Hee-ro, chairman of the Dokdo School, told the Korea JoongAng Daily.