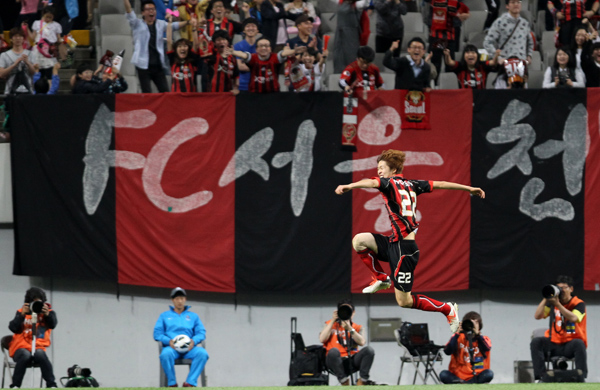 Yun Il-lok scored one goal and set up another as FC Seoul rallied from behind to beat Beijing Guoan, 3-1, to advance to the quarterfinal of the Asian Football Confederation Champions League.

Koh Myong-jin added a goal in the stoppage time at a second leg match held at the World Cup Stadium in Seoul on Tuesday, helping the host make it to its first ACL quarterfinal in two years. The 2012 K-League champion reached as far as the last eight in its short ACL history, once in 2009 and again in 2011.

Seoul had a scoreless draw in the first leg held at the Workers’ Stadium in Beijing on May 14.

“I got anxious after surrendering a lead early, but still kept the trust in the players and the team, and saw that led to a good result,” Seoul head coach Choi Yong-soo said after the match. “We will try to carry the momentum and get good results at the quarterfinals, semifinals and further.”

Seoul resorted to its “Demolition Duo” for a strikeback and Colombian midfielder Molina responded in the 27th minute by turning a pass from Montenegrin striker Dejan Damjanovic into a left-footer, which surged over the crossbar. The duo missed another chance in the 58th minute, as Damjanovic sent a penalty kick earned by a foul on Molina to the post.

The home side leveled the score in the 61st minute as Beijing goalkeeper Yang Zhi failed to clear away a Yun cross from the left corner, which Adilson Dos Santos picked up, tamed and tapped into the net. Eight minutes later, Yun found his own chance, connecting the deflected ball off a defender in the box into a right-footed cannon shot.

That changed the mood of the home team, which had to win the game to advance to the last eight. Under AFC rules, when two teams exchange the same number of goals through two leg games, the team that scores more in an away match is declared the winner.

Canoute was sent off in the 78th minute and Seoul charged further before it also dropped to 10 men after Dos Santos was shown a red card for a second foul in the 87th.

Koh assured the win with a tight angle shot in the injury time that went past the reach of the Beijing goalie and two defenders into the net.

“I see in our players a voracious desire regarding the Champions League,” Choi said. “Our challenge is from now.”