Project gets off the ground

Project gets off the ground 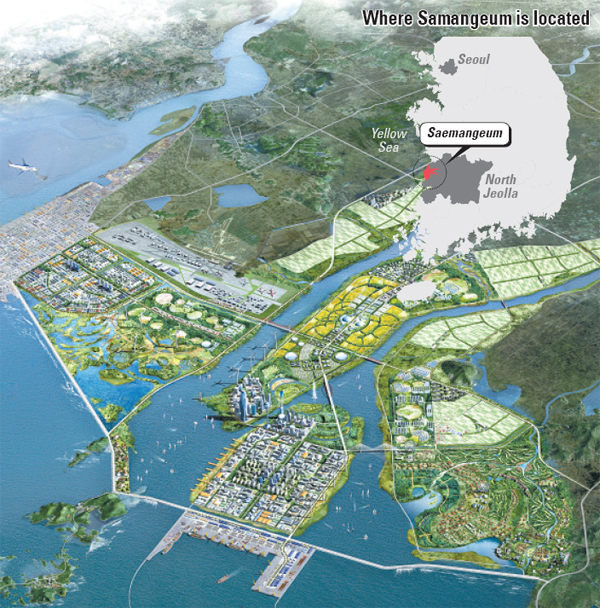 Artist’s rendering offers a bird’s-eye view of the Saemangeum development project. Provided by the Ministry of Land, Infrastructure and Transport

The Saemangeum area, reclaimed land on the Yellow Sea coast, will get a boost from a government plan to develop 401 square kilometers (155 square miles) in North Jeolla.

The Ministry of Land, Infrastructure and Transport yesterday issued a preliminary announcement of enforcement decree for the Special Act on Promotion of the Saemangeum Project.

The regulation stipluates a 40-day period for public comment, including public hearings, before the law takes effect on Sept. 12.

The revision of the special act was approved by the National Assembly last November, but with the presidential election and difficult economy, the ministry has been slow to draft the implementing ordinance.

The ministry yesterday confirmed the Saemangeum area development will be managed by the Samangeum Development Office starting in September.

The reclaimed land has been managed by six government agencies, depending on how it was used. Experts expect that consolidation of control will more effectively facilitate development.

Under the ordinance, the ministry said that part of the Gogunsan Archipelago also will be included in the Saemangeum project.

The regulation allows not only general construction businesses, but also real estate investment companies and trust business operators to join the project.

In addition, it confirmed the process by which land will be supplied to developers.

Residential housing property will be distributed through lottery; industrial land and property reserved for tourism, which requires foreign investors, can be done by private contract.

The government already allowed foreigner-only casinos on the land when it revised the law last year, but officials yesterday said those who want to open casinos must put up $300 million and an additional $200 million after two years.

Although final approval of casinos should be granted by the Ministry of Culture, Sports and Tourism, they must be part of hotels or convention centers.

The Saemangeum reclamation project started under President Roh Tae-woo in 1987 and was completed in 2010. The project reclaimed an area about two-thirds the size of Seoul after spending nearly 3 trillion won ($2.69 billion) and building a 33 kilometer seawall, the world’s longest.

Originally, 70 percent of the reclaimed land was for agriculture, but the plan changed in 2011 during the Lee Myung-bak administration, which wanted Saemangeum to become the “hub of Northeast Asia.”