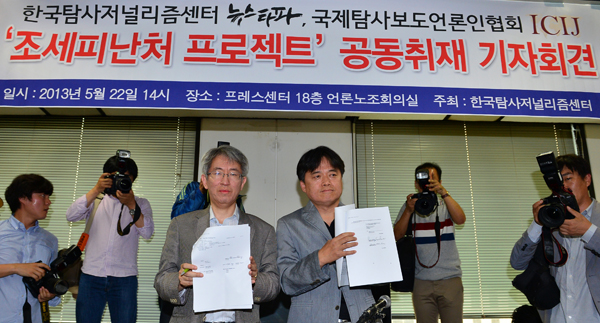 Newstapa President Kim Yong-jin, left, and the news media’s PD and main anchor Choi Seung-ho hold the list of names of Koreans who have set up shell companies at tax havens during a press conference held yesterday in central Seoul. [NEWSIS]

A nonprofit Internet media outlet held a press conference at 2 p.m. yesterday at the Korea Press Center in Jung District, central Seoul, and claimed that a total of 245 Koreans, including executives in the country’s major conglomerates, have shell companies in tax havens overseas including the British Virgin Islands and Cook Islands.

Newstapa (www.newstapa.com) has been participating in the International Consortium of Investigative Journalists’ “tax haven project.” It said it has documents from Portcullis TrustNet and Common Wealth Trust Limited, companies that helped chaebol and other companies establish shell companies. It said the two companies have about 130,000 corporate customers worldwide and have established about 122,000 shell companies in tax havens.

The news came when the government has been increasing their tax investigations into such illicit practices under the economic democratization movement, while the food and entertainment conglomerate CJ Group is currently being hammered by the prosecution for its alleged offshore evasions.

Newstapa said the lists of potential tax dodgers were found during a joint investigation with the International Consortium of Investigative Journalists (ICIJ).

According to Newstapa, the OCI Chairman and his wife opened the shell company Richmond Forest Management Limited on April 28, 2008 on the Virgin Islands.

The OCI Chairman is on Forbes’ list of the top 40 richest men in Korea and he is believed to have personal assets of 900 billion won. His wife Kim Kyung-ja is the head of the OCI art gallery. Lee, who has been running the energy conglomerate since 1996, is known to have stressed ethical management.

Cho, who is currently the advisor at the nation’s leading airliner, is the younger brother of the late Hanjin Group founder and Chairman Cho Joong-hoon.

The eldest son of DSDL Chairman Cho Wuk-rai was also on the list for setting up the shell company Quick Progress Investment in the Virgin Islands on March 15, 2007.

The DSDL Chairman is the youngest brother of Hyosung Group Chairman Cho Suck-rai.

Newstapa said it was able to obtain the list of potential tax evaders through internal data obtained from Portcullis Trustnet and Commonwealth Trust Limited. It went through 130,000 client lists and 122,000 shell companies to find the Koreans.

“Clients usually visit lawyers or banks when they plan on setting up a shell company,” Newstapa said in a statement released yesterday. “These middlemen [lawyers and banks] introduced the clients to these companies [Portcullis Trustnet and Commonwealth Trust Limited] that help set up companies on the Virgin Islands.”

Newstapa said the 245 Koreans set up shell companies at tax havens between 1995 and 2009. Especially, the amount of shell companies that were founded has been growing sharply since the mid-2000s and strongly concentrated before and after 2007.

It added that 159 people registered their addresses here while 86 registered overseas addresses, including those in Hong Kong and Singapore.

Newstapa said one Korean created as many as five shell companies. The news outlet said it plans to make public the rest of the list.