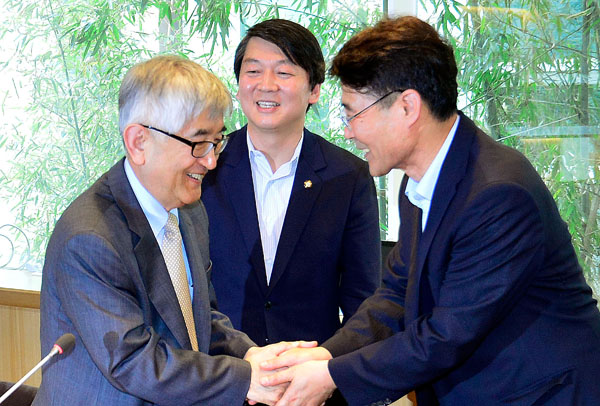 Liberal darling Ahn Cheol-soo, an independent lawmaker and former presidential candidate, announced yesterday his plan to launch a think tank, in a symbolic first step to create his own political party.

At a press conference yesterday, Ahn formally announced the launch of his think tank, named the “Policy Network Tomorrow,” and appointed two other liberal icons as its leaders.

Choi Jang-jip, Korea University emeritus professor and the nation’s leading liberal scholar, will serve as chairman of the board.

Jang Ha-sung, Korea University economics professor who is also known for his work as a shareholder activist, will serve as the think tank’s head. During Ahn’s short-lived presidential campaign, Jang had served as a primary figure.

“The policy network is open to everyone, not just to policy experts,” Ahn said yesterday. “The priority is communicating with the public, and we will connect with other civic forums in various areas to reflect the voices from the fields.”

While Ahn cautiously denied that the think tank will serve as his springboard to organize his political group ahead of the major legislative by-elections in October, Choi admitted yesterday that Ahn is destined to create his own political party.

“I will play a role in the theoretical aspect to serve as the basis of judgment,” Choi said when asked if Ahn is capable of creating a political party and if that is an appropriate move since he is a strong advocate of party politics. “Under the current situation, I think we are bound to move toward the direction of creating a new political party.”

He also said Ahn’s relationship with the Democratic Party, the largest liberal opposition party which Ahn eventually endorsed in the December presidential election after a bitter fallout in negotiations to form an electoral alliance with candidate Moon Jae-in, will be determined in the future.

While stressing the importance of political parties in a democracy, Choi said the think tank’s main task is helping to create good political leadership.

“I was never affiliated with a political party, but I was interested in assisting the liberals in developing good political resources,” Choi said, adding that “I cannot deny that there was an opportunity for me to work with the Democratic Party.”

“There is no other man besides Ahn who persistently and sincerely approached me with passion to learn politics and democracy,” Choi said. “I was moved by Ahn’s passion and that allowed me to work as the board director.”

Ahn also said yesterday that he recruited Choi because of the scholar’s deep affection for democracy and party politics.

Speculations grew quickly that Ahn, by recruiting Choi, is trying to establish his own political group to win higher ground in his competition against the Democratic Party to control the opposition. Ahn recently said he will make a challenge in the October by-elections if he finds good people.

According to Jang, the institute will be operated by raising funds from the public.