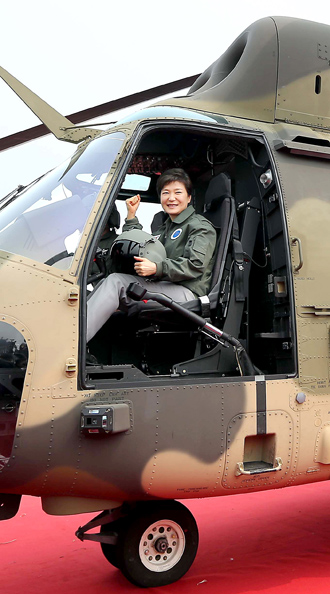 President Park Geun-hye poses in the cockpit of a Korea-built helicopter yesterday while attending a ceremony at the Army Aviation School in Nonsan, South Chungcheong, to mark the first operational deployment of five locally built Surion transport utility choppers. The Korean Army said yesterday 20 Surion helicopters will be built and deployed by the end of this year. It was the first time a president attended an operational deployment ceremony of the military since 1987. She also inspected major research projects at the Agency for Defense Development, founded by her father, Park Chung Hee, and issued another message to North Korea to stop making threats. The visit was intended to check the nation’s readiness against security threats and to explore how defense science and technology can be included in her campaign to develop a “creative economy” for Korea. [Joint Press Corps]