For refugees in Korea, a place to begin anew

For refugees in Korea, a place to begin anew

The Refugee Supporting Center, which is being criticized as an “isolated prison camp” by refugees and human rights activists, is being built on Youngjong Island, Incheon. It’s scheduled to open in September. By Park Sang-moon

Beginning July 1, Korea will be the first country in East Asia to enact an independent Refugee Act, which is a response to the lack of an adequate legal framework to deal with refugees, who were covered under existing immigration law. This is the second of a two-part series on how the country has been dealing with the refugee issue.

On a large government site on the island of Youngjong, Incheon, a red-bricked three-story building has been under construction for more than a year. About 80 percent of the building is finished, however, the periphery still looks bleak and deserted.

The building is the new “Refugee Supporting Center” that the government created to provide support for refugee status applicants and recognized refugees in Korea to comply with the newly enacted independent Refugee Law, which takes effect July 1.

Despite the government’s “good intentions,” the center is being criticized for being in an isolated area, which will “harm the social adaptation of refugees in Korea rather than helping them to mingle with Koreans, says Yiombi Thona, a Congolese native who was recognized as a refugee in Korea after more than six years of waiting.

“The new shelter for refugees is being established on an isolated island. They’ll have no freedom to move,” said Thona. “Why doesn’t the Korean government build the shelter in the city? The Refugee Convention of the UN recommends a country to help refugees integrate. But if there’s a shelter for refugees on an island next to an airport, it’s definitely not going to help refugees integrate. It’s like a prison camp to us, not a shelter.” 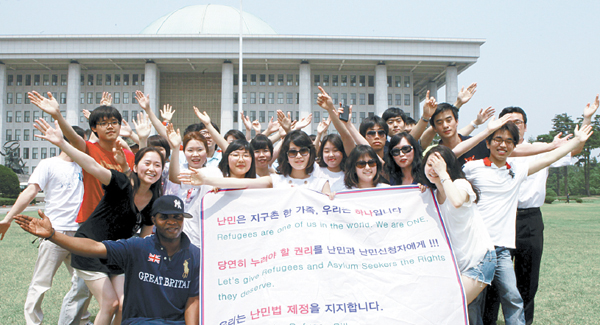 Human rights activists for refugees hold a flashmob in front of the National Assembly Building to urge enactment of the Refugee Act in 2011. [JoongAng Ilbo]

Strange as it may sound, the legal basis used to protect refugees in Korea has been the Immigration Control Act. After joining the 1951 Refugee Convention of the United Nations in 1992, Korea inserted additional clauses in its existing Immigration Control Act as a way to ratify the convention, following Japan’s example. Since then, that law, which controls the immigration of foreigners, has been used to regulate refugees who are seeking shelter.

“All foreigners - whether refugees or not - can only be perceived as either legal or illegal through the lens of the Immigration Control Act. And as we have been viewing refugees through this lens, which simply classifies foreigners into legal or illegal only, we have been neglecting refugees’ vulnerability and special circumstances where their illegal entry and stay in Korea is inevitable,” said Kim Jong-chul, a director and an attorney at law at the Advocates for Public Interest Law (APIL).

Although Korea opened its doors to refugees in 1994, it didn’t approve anyone as a refugee until 2001, when an Ethiopian man came here because he was being persecuted over his political beliefs. Before he was approved, 104 applications were rejected. According to human rights activists for refugees, the Ethiopian man is said to have left Korea and moved to Italy despite being recognized as a refugee because he was “unable to endure racial discrimination and hardships of life in Korea.”

Noticing how the country has been “closed” to refugees, lawyers and refugee activists started a series of discussions in 2006 to make an independent refugee law and policies that are “in line with the spirit of the Refugee Convention,” said Kim from APIL. 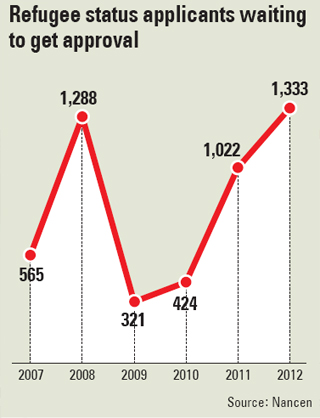 In 2009, the Seoul Bar Association made a draft of the Refugee Act in 2009 and proposed it to the National Assembly, which passed the law at the plenary session on Dec. 29, 2011. Because it was the first national independent refugee law among East Asian countries, the Korean government announced it to the public, saying how significant it was for Korea as a country that protects refugees in Asia.

However, according to Kim from APIL, the law is “considerably different from what was originally proposed as it was drastically changed due to the Ministry of Justice’s objection against the original proposal with concerns about an increase in the number of refugees to Korea.”

As required by the law, the government allocated 2 billion won ($1.78 million) this year to support refugees in Korea, which includes providing “basic livelihood security, education, social integration programs” as well as “living expenses, residential facilities and medical services,” even for refugee status applicants. However, despite the increased budget, most of the money is being used to build and operate the new center.

According to an official from the Ministry of Justice, the center was scheduled to be completed and begin operation before the law takes effect July 1, however, due to “number of delays, the building will be completed around September.”

“Establishing a Refugee Supporting Center in Youngjong Island seems like a project that got realized for the convenience of administration,” said Kim Seong-in, the director of Nancen, a human rights activists’ group for refugees. “It’s like cornering them into a prison camp.”

Next to the new Refugee Supporting Center, there are three heliports for the Incheon Fire and Safety Management Department, Incheon Coast Guard and Incheon Metropolitan Police Agency’s air force team. In front of the center, there’s a sewage disposal plant.

“Around the center, there’s nothing but heliports, mud flats, a sewage disposal plant and an airport,” said Kim from Nancen. “It’s an improper spot as a residential area.”

Kim also criticized the spending of about 1.9 billion won on the center’s construction and operation costs as “an excessive budget allocation.”

“The majority of the recognized refugees or refugee status applicants reside around Seoul and Incheon at the moment and there are already many facilities and programs for foreigners in those metropolitan areas,” said Kim. “Of course, it’ll be great if the government can provide accommodation or basic living subsidies for refugees or refugee status applicants. But with a limited budget, I think it’s better to add more labor force to shorten the time it takes to examine applications.”

About 400 refugee status applicants and refugees can stay at the center and their stay must be renewed every three months.

Kim said it takes about 18 months to three years on average for a person who has applied for refugee status to go through the process and to be recognized as a refugee in Korea. Kim added that the waiting period has been gradually getting longer, affecting the hardship of refugee status applicants.

“There are only three people at the Seoul Immigration Office who review the application forms. That’s why it takes so long to receive the result. The longer it takes, the longer these refugee status applicants’ unstable life becomes,” said Kim. “By adding more manpower to shorten the duration, say, by six months for example, it will be a big help to these refugee status applicants.”

Kim from APIL agreed, saying that shortening the duration will also lower the number of people who try to abuse the system.

“Every law has a person who tries to abuse it. If the refugee status applicants don’t have to wait this long, the number of people who try to abuse it will certainly decrease. Currently, it takes at least a year to receive a date for an interview from the Immigration Office after submitting an application. Knowing that, those who want to stay in Korea will abuse the system to be here legally during that period.”

Moreover, during the application period, the applicants receive a G-1 visa, which needs to be renewed every three to six months. Currently, G-1 visa holders can start working legally in Korea one year after the submission of their application. When the new law takes effect, the one-year wait will be shortened to six months.

However, Kim says it’s not easy for refugee status applicants to get jobs in Korea.

“Not many Korean business owners will be willing to provide job opportunities for such visa holders as they prefer workers who are more stable,” said Kim. “The only jobs they could get would be working in factories and that’s not so much different from illegal workers in Korea.”

Kim also insisted that the government is “engaging in malpractices in attempts to lower the number of people applying for refugee status.”

Among “many cases,” Kim describes detaining refugees in custody as the most “inhumane.”

“Recently, I dealt with two to three cases that detained people who were applying for the refugee status in Korea to question them. In that way, the word spread and the people who are in similar situations get scared to apply for the refugee status,” said Kim. “That’s one of the ways the government is trying to control the number, in my perspective.”

According to Kim, a 26-year-old Iranian woman fled from her country after being persecuted for converting from Islam to Christianity. Her fundamentalist Muslim father threatened to kill her if she didn’t convert back to Islam and stabbed her face and body. Her father also called the police to follow her. After receiving death threats, she forged her passport through a broker and stopped over in Korea in May 2011 on her way to Canada.

But when she arrived in Korea, she lost contact with her broker and got stranded. As her illegal stay in Korea got longer, she applied for refugee status this March and went to the Immigration Office. She confessed that she had come to Korea with a forged passport with plans to flee to Canada. However, the Korean government rejected her application and detained her at the Hwaseong Immigration Processing Center.

Kim says if a refugee status applicant reports that he or she entered a country illegally, the applicant should not be detained to be interviewed during the refugee application process, however, he insisted that the Korean government seems to ignore the regulation and carry out the detentions.

“This is an evident act of malpractice carried out by the government to intimidate those who want to apply for a refugee status in Korea,” said Kim. “In that way, they can keep the number of refugee status applicants to a minimum.”

According to Ministry of Justice, of the 5,069 people who applied for a refugee status in Korea until 2012, 978 were from Pakistan, accounting for 19 percent of the total number, which is the highest. Those from Sri Lanka ranked second with 612 people, followed by Nepal and Myanmar.

Opposition to law was fierce

Kim says he received many phone calls from people criticizing him for leading the way. “People think that with this new Refugee Act, there’s going to be numerous benefits going to refugees and they oppose it. But the reality is totally different. Most of the benefits that are specified in the Refugee Act already existed under the Immigration Control Act. But because it’s becoming an independent law, they are concerned about it without fully understanding what’s really going on.”

Kim from Nancen agreed, saying, “the independent Refugee Act is great as a catchphrase but I doubt how much effect it will have on the actual refugees and refugee status applicants in Korea.”

“The government and the media have been informing the public as if the refugees are going to experience a tremendous change but it’s just very symbolic. I give them a pat on the back for finally having some attention on refugee issues but unless the actual benefit affects the refugees, I don’t think I can give them applause,” said Kim.