For Japan’s Nikkei index, the party’s over

For Japan’s Nikkei index, the party’s over 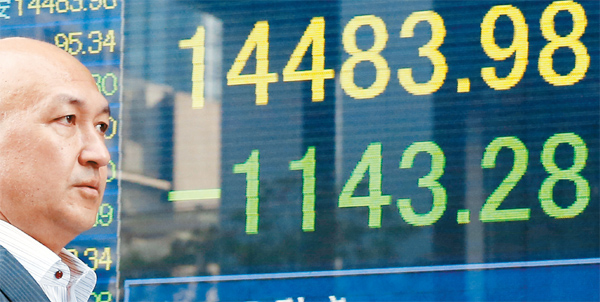 A man walks past an stock indicator showing the Nikkei 225 index, which nose-dived 1,143.28 points, or 7.3 percent, to close at 14,483.98 yesterday in Tokyo. Japanese stocks dove after a spike in bond yields and unexpectedly weak Chinese manufacturing spooked investors sitting atop months of massive gains. [AP/NEWSIS]

The dollar rose against most of its major peers after Bernanke sparked speculation the central bank could slow the pace of bond purchases.

Trading in the Nikkei 225 Stock Average futures was halted after a slump in contracts triggered circuit breakers. 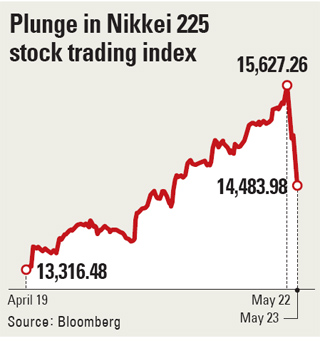 Japanese equities had risen “too much, too fast,” particularly financial stocks, and need “some kind of correction” before they can resume their climb, former Ministry of Finance official Eisuke Sakakibara said in a May 15 interview. Sakakibara is known as “Mr. Yen” because of his efforts to influence exchange rates in the late 1990s.

Manufacturing in China unexpectedly contracted for the first time in seven months, according to a report from HSBC Holdings and Markit Economics.

“Weak data from China combined with speculation the Fed may phase out quantitative easing are causing jitters,” said Paul Joseph Garcia, who helps manage the equivalent of $18 billion as Manila-based head of institutional business at BPI Asset Management. “The tactical strategy is to be on the defensive -increase cash and reduce exposure to risky assets.”

The yen rose 1.3 percent to 101.87 per dollar as it strengthened against all 16 of its major peers. Japan’s 10-year bond yield declined five basis points to 0.84 percent in Tokyo, according to Japan Bond Trading. It earlier climbed to 1 percent, a level unseen since April 5 last year.

Market observers in Korea are keeping watchful eyes on the latest development of Nikkei as its future movement is likely to certainly influence the fluctuation of the Korean stock and foreign exchange market again.

Korea’s automobile and other industries, which compete with Japanese rivals, have been seeing snowballing losses due to weakening Japanese yen.