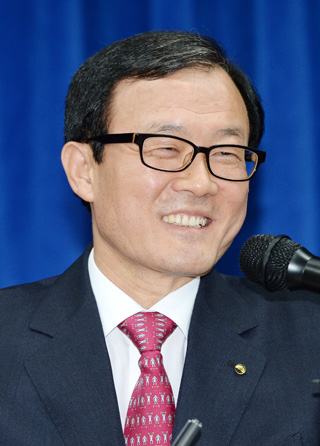 A veteran banker with 36 years in the business, Woori Bank President Lee Soon-woo said yesterday he will do his best to realize the privatization of Woori Financial Group as new chairman of the nation’s largest financial group.

Woori Financial Group Chairman Lee Pal-sung announced on April 14 that he would step down.

The newly named chairman stressed he will serve only until the 57 percent-stake owned by the government is sold.

“I will step down once the privatization is complete,” he said at a press briefing in central Seoul.

Lee will continue as Woori Bank president. It is the first time the financial group has had a president who also is chairman since 2007, when Hwang Young-key was ousted.

After graduating from Sungkyunkwan University with a bachelor’s degree in law, the newly appointed Woori Chairman joined what was then the Commercial Bank of Korea, which later became Woori.

He has worked in departments dealing with public relations, personnel, corporate finance and retail clients. He also worked in Woori’s branch in London.

Lee became senior vice president of the bank in 2008 and was promoted to president in March 2011.

“We have chosen Lee as we believe he will successfully complete the privatization of the bank with his wide and in-depth knowledge of the financial industry,” said Song Woong-soon, who headed the selection committee.

At yesterday’s press briefing, the new chairman stressed that a merger is not the only way to privatize.

There have been growing speculations that its rival KB Kookmin Bank is interested in taking part in the bid.

The biggest financial group by assets has failed to sell the government’s majority stake three times since 2010, under the Lee Myung-bak administration.

Hana Financial Group was one of the interested parties, but pulled out and later settled for the smaller Korea Exchange Bank. On the second try in mid-2011, only three private equity funds were found to have interest. On the third try, KB Kookmin Bank showed interest, but board members decided not to pursue a purchase.

Lee’s appointment as chairman will be finalized after it is put to a vote at a shareholders’ meeting June 24.

Meanwhile KB Kookmin Bank, whose chairman, Euh Yoon-dae, will step down in July, said it will narrow 50 or so contenders to one and suggest the name to its board members by mid-June.