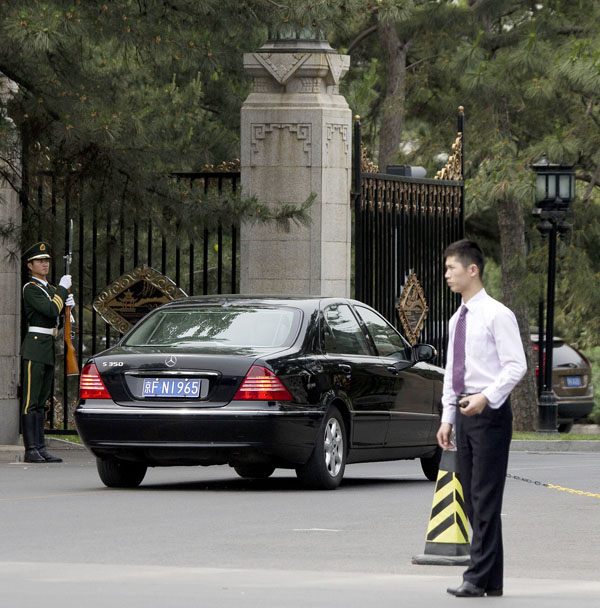 The special envoy of Kim Jong-un met with the fifth-highest figure in the Communist Party of China yesterday on the second day of his visit to Beijing.

As of press time, Choe Ryong-hae, director of the General Political Bureau of the North Korean People’s Army, had not been received by Chinese President Xi Jinping, but it was too early to say he has been rebuffed.

But something has clearly changed between Beijing and Pyongyang.

Yesterday evening, Choe met with Liu Yunshan, a member of the Standing Committee of the Political Bureau of the Communist Party’s Central Committee, at the Great Hall of the People in Beijing, the state-level Chinanews.com reported.

In North Korean politics, Choe ranks third following leader Kim Jong-un and Kim Yong-nam, the chairman of the Presidium of the Supreme People’s Assembly, a similar rank as that of Liu, who is fifth in the seven-member Standing Committee.

At around 5:15 p.m., an array of sedans were seen nearing the hall, guarded by policemen, from the Diaoyutai State Guesthouse in Beijing. It was assumed they carried the North Korean delegation.

Liu was the highest Chinese official to meet Choe’s delegation as of yesterday evening. Sources said the delegation is scheduled to return to Pyongyang today.

The visit to China by Kim Jong-un’s special envoy has been handled like no other previous visit, suggesting that Beijing has a new approach to the ally it used to claim was as close to it as lips and teeth.

Kim sent Choe on a special mission, his first special envoy to Beijing, and sent with him a handwritten letter to deliver to Chinese leader Xi Jinping.

When Choe landed at the airport with his delegation, they were photographed by the Chinese government, and the photos were broadcast by state-run CCTV that evening, which was unprecedented.

Previous envoys visits were treated with great discretion - actually secrecy. China only released information and photos of a North Korean bigwig’s visit after his return to Pyongyang. They kept strict silence as the visits took place in Beijing.

A day before the delegation’s visit, a newspaper run by the ruling Communist Party said China should stop supporting Pyongyang unconditionally and pursue more transparent diplomacy.

“From now on, the relation between China and North Korea should be a fact-based one, not embracing the wrongful acts of the North unconditionally,” the Huanqiu Shibao, a Chinese-language newspaper said in an editorial on Tuesday. The Huanqiu Shibao is known for taking slightly more extreme positions than other government newspapers like the People’s Daily.

It is also very rare for China to have shared information on the visit of an envoy like Choe with Seoul and Washington. But sources said Wednesday that China warned both of them in advance.

When Jang Song-thaek, the powerful uncle and political protector of leader Kim Jong-un, visited Beijing in August, Beijing did not inform Seoul in advance. “China’s diplomacy with North Korea is starting to follow the rules of the international community,” a diplomatic source in Beijing told the JoongAng Ilbo.

“The prior notice of the Choe delegation’s visit to Beijing is the first step toward playing by normal rules,” he said.

China also kept its word on how it would handle Pyongyang. In March, the Chinese Foreign Ministry publicly said, “China would never send a special envoy to North Korea first.”

After North Korea tested a long-range rocket in December, China attempted to send a special envoy to Pyongyang three times, but the North turned down all visits.

In April, North Korea called for a special envoy from China, but Beijing refused, publicly saying if Pyongyang wanted a dialogue, it should send an envoy.

Sources say the refusal of China to send an envoy to North Korea would have been unprecedented during the 10-year term of former President Hu Jintao, who gave way to Xi in March.

“Currently, China is walking on a path of responsible diplomacy in accordance with its international status and in an attempt to develop a new diplomatic relationship with the United States,” said Zhan Xiaohong, a Koreas expert at the Chinese Academy of Social Sciences, a top state-run think tank in China.

“Accordingly, the diplomacy with Pyongyang will be transparent and rather neutral,” he continued, “adjusted to international community’s obligations.”

A Blue House official also said South Korea, the United States and China “are in relations closer than in any other period.”

“The fact that China informed not only us but Washington about the visit of the delegation means that the trilateral cooperation among the three countries is working out,” the official said.