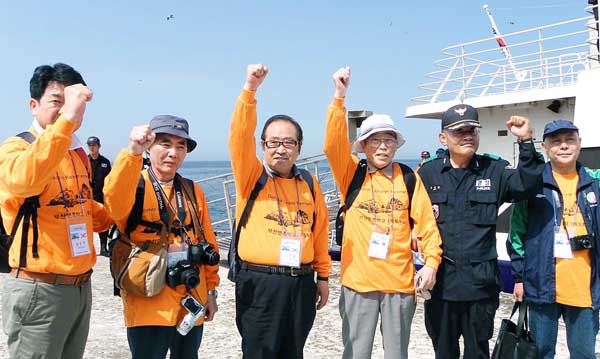 Three Japanese scholars (second, fourth and sixth from left) posing with Korean Coast Guard officials, shout out “Dokdo is Korean territory” as they visit the Dokdo islets in the East Sea yesterday. A group of 22 people, organized by Busan-based Dokdo School, headed to the islets in a landmark visit wearing matching t-shirts stating “Dokdo is Korean Territory.” [NEWSIS]

Three Japanese scholars trod Dokdo soil and declared it Korean land for the first time yesterday, amid ongoing historical and territorial disputes between Tokyo and Seoul.

They departed from Sadong Port on Ulleung Island in the East Sea with a group of 22 people, including 10 Chinese and Mongolian students and Korean scholars from Dokdo School, around 7:20 a.m. to the easternmost islets of Dokdo, called Takeshima by Japan. Two hours later, the group, sporting matching orange t-shirts with “Dokdo is Korean Territory” across the chest, landed on Dokdo.

Their visit was limited to 30 minutes, during which the group waved a Korean flag, crying out “Dokdo is Korean territory” three times. They also recited an ode declaring their love for Dokdo.

But the fourth man, Yuichi Sakamoto, former professor at the Kyushu International University, at the last minute refused to wear a t-shirt declaring that “Dokdo is our [Korea’s] land” and didn’t board the boat on Ulleung.

Regarding Sakamoto’s last-minute change of heart, which had not been anticipated, Kim Hee-ro, chairman of the Dokdo School, told the Korea JoongAng Daily, “It appears that he refused to wear the matching t-shirts which said ‘Dokdo is Korean Territory’ because he stated that as a scholar, he is unsure whether Dokdo is Korean or Japanese territory. He said there still needs to be more research done.”

Kim added, “However, he does agree that the Japanese government has to reconsider designating Takeshima Day a national day.

“The Japanese government, though they know the truth, insist that Dokdo is their territory, so Japanese scholars visiting Dokdo and declaring ‘Dokdo is Korean territory’ is a significant event,” said Kim.

The Japanese scholars are members of a volunteer group that was formed in Japan by historians, religious figures and activists in April which calls itself “A Civic Group Protesting Takeshima.”

Earlier this week, the four professors held a press conference in Busan and agreed to reconsider the Shimane Prefecture [government]’s plan to declare a Takeshima Day.

Kuboi yesterday expressed regret that Japanese people think that “Dokdo is Japanese territory” and that Korea is “occupying” it.

Seoul’s official position is that there is no territorial dispute over Dokdo, that it is historically Korea’s land.