In fighter jet deal, EADS adds $2B to sweeten bid

In fighter jet deal, EADS adds $2B to sweeten bid 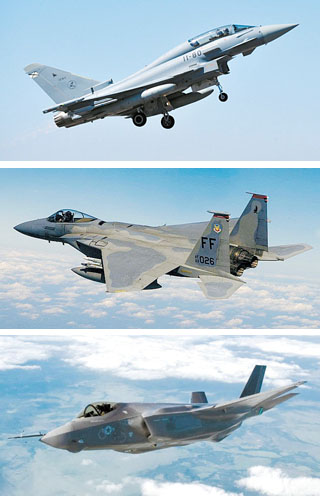 A European bidder in Korea’s next-generation fighter jet project yesterday offered a large investment in the country’s program to develop an advanced multirole fighter if it clinches the massive deal to supply 60 new aircraft to Korea.

The European Aeronautic Defence and Space Company (EADS), one of the bidders in the country’s next-generation fighter jet project, said yesterday if it wins the deal, it will make a $2 billion investment in Korea’s program to develop its own advanced fighter jets.

In a press release, EADS said it will jointly develop Korean fighter jets if it can supply the next-generation fighter jets. EADS said the offer was in addition to its earlier promise to produce 53 of the 60 Eurofighter jets in the country.

The government announced a plan last year to purchase 60 advanced combat fighters to defend the country’s airspace for the next 30 years by spending 8.3 trillion won ($7.2 billion).

The contender jets are the F-15 Silent Eagle by Boeing, the F-35 Lightning II by Lockheed Martin and EADS’ Eurofighter Typhoon. The selection is scheduled to be made next month.

Competition is heating up with the European group’s aggressive offers.

EADS initially proposed to deliver the first 10 units in ready-to-fly condition and assemble the remaining 50 in Korea. It recently changed the offer to say it will build 53 units in Korea. Analysts say that is attractive as a way to deepen Korea’s fighter jet development technology.

Then yesterday EADS promised to invest $2 billion in Korea’s own fighter jet development program, code-named KF-X and also known as the Boramae project. The KF-X program was first initiated in 2002 to replace Korea’s aging fleet of F-4s and F-5s with new midlevel aircraft by 2020. While the military will purchase advanced combat aircraft from overseas through the F-X project, it wants to develop and build midlevel fighters at home.

While this year’s budget for the Boramae project was scrapped for austerity reasons, a 4.5 billion won budget was allocated for a feasibility study this year.

The Defense Acquisition Program Administration reacted with caution at EADS’ newest proposal. “It is an offer conditioned to their winning the F-X bid,” an official from the procurement administration told the local media. He also said the future of the KF-X project is yet to be determined and it is separate from the F-X deal.

Baek Yoon-hyeong, a spokesman of the Defense Acquisition Program Administration (DAPA) said yesterday that price negotiations have already been completed and no additional negotiations on price will take place.

“We will have the final process to make the formal bidding on the price in June,” Baek said.

He added that the primary selection process is expected to be completed before the first half of this year, as earlier announced.

The project was kicked off in January last year, and the DAPA had initially aimed to select a bidder by October.

The timetable was eventually changed so that the selection could be made before the first half of this year under the new administration. Yonhap News Agency reported yesterday that the timing of the first delivery was also pushed back one year to 2017.

As the selection nears, bidders are increasingly making new proposals to persuade the Korean government. During President Park Geun-hye’s visit to the United States earlier this month, Boeing pledged to build an avionics maintenance, repair and overhaul center in Korea.

The American aircraft builder will initially invest $20 million in the project in Yeongcheon, North Gyeongsang, and expand the facility later by committing another $100 million.