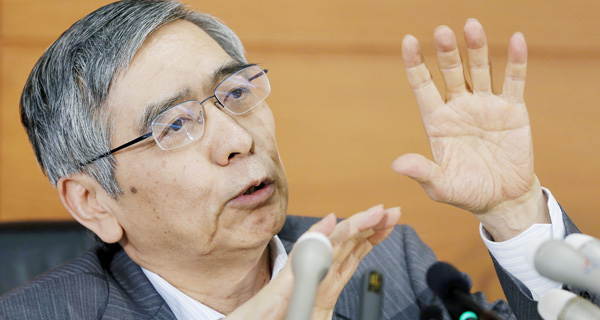 Haruhiko Kuroda may need to talk his way out of a paradox he helped create.

Installed as Bank of Japan chief in March, Kuroda aims to unlock borrowing and spending by lifting inflation expectations and wages after 15 years of deflation. Market volatility partly triggered by the BOJ’s record bond-buying now threatens to sap business and consumer confidence and weaken the campaign to reflate the world’s third-biggest economy.

At a press briefing on Wednesday Kuroda said gains in yields could be expected as the economy improved, after saying previously that the central bank aimed to lower interest rates. The next day, 10-year government bond yields reached the highest level in a year. Kuroda said yesterday that he’ll keep strengthening communication with the market and that the unprecedented stimulus announced by the central bank is sufficient.

“Kuroda must be feeling the difficulty of communications with the market,” said Masayuki Kichikawa, chief Japan economist at Bank of America in Tokyo. Investors wanted “stronger comments from the BOJ on not allowing yields to rise and more specifics on how the BOJ will address volatility in the bond market. Kuroda will have to tone up his rhetoric. This is the hardest part of unprecedented massive easing. You can’t only think about inflation and the economy. You have to take care of the massive bond market.”

Kuroda said on Wednesday the BOJ wanted to avoid “excessive volatility” in the debt market. Speaking at a conference in Tokyo today, he reiterated that sentiment, and said he wants to stabilize bond trading with flexible BOJ operations. He also said the central bank has announced sufficient monetary easing.

“Such double talk makes us feel that Mr. Kuroda does not really understand what he is doing,” said Takuji Okubo, chief economist at Japan Macro Advisors in Tokyo, formerly of Goldman Sachs Group, referring to comments on yields. “If he thought that interest rates would rise if his policy succeeds, why did he say his policy would lower interest rates?”

Economy Minister Akira Amari yesterday warned against panic after the share market decline and a jump in the yen, saying that the economy is “recovering soundly.” Even after Thursday’s stock sell-off, the Topix, Japan’s broadest share measure, remained up 38 percent for the year.