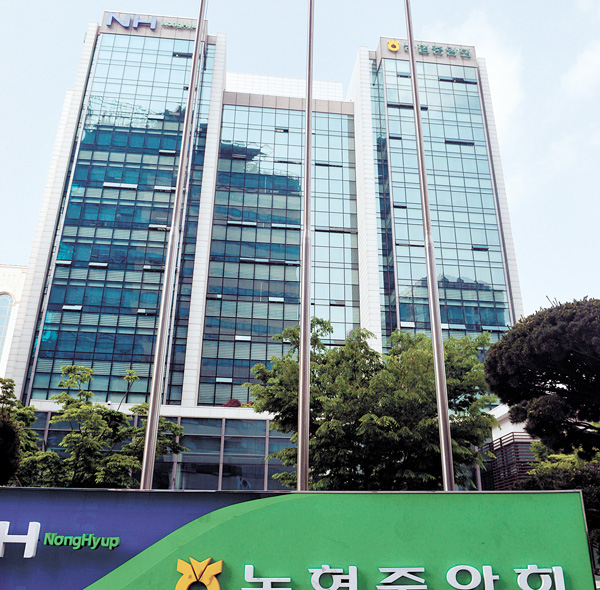 Following the resignation tendered by the chief of Nonghyup Financial Group last week, four high-level management officials notified the National Agricultural Cooperative Federation yesterday that they intend to quit, signaling a major restructuring within the organization.

The agricultural cooperative federation, which holds a 100 percent stake in Nonghyup Financial Group, said yesterday that Yun Jong-il, the federation’s executive vice president; Kim Soo-kong, chief executive of agrobusiness; Choi Jong-hyun, chief executive of the cooperative bank division; and Lee Boo-keun, head of the cooperative audit division quit en masse. The executives are known to have said they resigned in the hopes that Nonghyup undergoes reform and boosts its economy-related businesses.

Last Wednesday, Shin Dong-kyu, head of the financial institution, abruptly offered to step down due to growing internal conflict and security problems that generated public criticism. Shin’s resignation surprised many people because he was appointed last June.

Nonghyup Financial officially said last week that Shin “offered his resignation to the largest shareholder, the cooperative federation, thinking it would be better for a more talented official to head a financial institution that has recently been experiencing difficulty.”

There has been much speculation that Shin did not get along well with National Agricultural Cooperative Federation Chairman Choi Won-byeong. Shin told the JoongAng Ilbo last week that he decided to leave because there were too many restrictions managing the business.

Nonghyup Financial Group was formed in March 2012, when the financial division of the agricultural cooperative Nonghyup spun off from other businesses like retail and distribution. Shin announced aggressive business goals, but he had difficulty pushing through his business plans.

According to industry sources, the four top-level executives at the federation had planned to step down with Shin last week, but Shin dissuaded them out of concern that a large number of executives resigning would cause too much trouble within Nonghyup and hamper the selection of a new chairman.

Nonghyup Financial Group, meanwhile, said yesterday it formed a special chairman nominating committee during the board of directors’ meeting. The five-member committee consists of two outside directors, two outside experts and one official recommended by the federation chairman.

“The committee will hold its first meeting on Monday and select the head of the committee and discuss the procedure on how it will screen nominees,” said an official from the financial group, adding it is likely a headhunting company will make recommendations along with those from other internal officials.