Mother sacrifices all for her son with muscular dystrophy

Mother sacrifices all for her son with muscular dystrophy 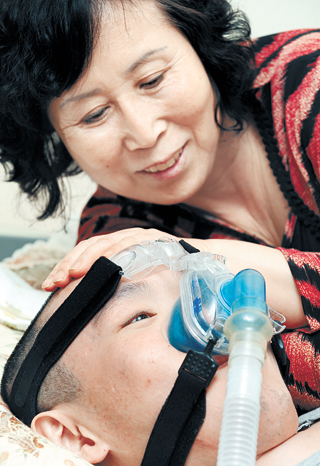 Kim Ha-sun smiles while looking at her son Cheon-su. Provided by KT Rental

“The person who I care the most about, love the most and respect the most in the world is my mother,” Kim Cheon-su wrote on his computer in Korean.

Cheon-su delivered the message with a computer instead of speaking because the computer is far more convenient for him.

The 35-year-old man has suffered from muscular dystrophy for 19 years. The disease is progressive and incurable.

When a person has muscular dystrophy, muscle fibers become increasingly susceptible to damage and progressively get weaker, eventually resulting in a person being confined to a wheelchair.

He uses an on-screen keyboard that allows him to type using a trackball mouse with his right thumb and click a keyboard with his left thumb. Those two thumbs are the only fingers he can still use.

The critical disease came on unexpectedly when Cheon-su was just an 8-year-old boy.

He often stumbled and he had a difficult time climbing stairs. His 58-year old mother, Kim Ha-sun, took her son to see doctors at several hospitals, but his disease wasn’t identified.

Cheon-su’s mother eventually took him to Gangnam Severance Hospital where she learned he suffered from progressive muscular dystrophy. She also learned the tragic news that the disease can’t be cured.

By the age of 11, Cheon-su couldn’t walk. He couldn’t breathe on his own. He relies on a respirator. He only weighs 30 kilograms (66 pounds). If he wants to empty his bowels, he can only do it after his mom massages his stomach.

“I’m a great fan of singer IU and I really want to meet her,” Cheon-su said. “Although I’m sick, I have a desire in all matters, the same as healthy people.”

“Without my mother, I wouldn’t be able to live happily like this,” he said.

Cheon-su’s mother Kim Ha-sun, who has been looking after her son for 19 years, continued working at a textile factory to pay for her son’s hospital treatment expenses.

Kim once sent him to a rehabilitation center in 1993 but she began taking care of him by herself when his weight dropped to 26 kilograms.

With the help of relatives, she has stayed by his side 24-7. Kim rarely has a chance to go outside except for when she takes him to a hospital.

The mother and son had a chance to go on a seashore picnic on the East Sea in 2000, the trip of a lifetime for the two. Cheon-su’s condition worsened and Kim couldn’t travel with him without a driver and helper.

Despite the challenge, the two traveled to Sokcho and Yangyang in Gangwon from Thursday to Friday for the first time in 13 years.

KT Rental provided a car, a driver and an assistant for the family after Kim made a request detailing her son’s condition on the company’s Web site.

“I should have sent my mom on a trip,” Cheon-su said. “If I was healthy, I would have done that just like others do for their parents. I wanted to see the ocean with mother before my condition gets worse.”