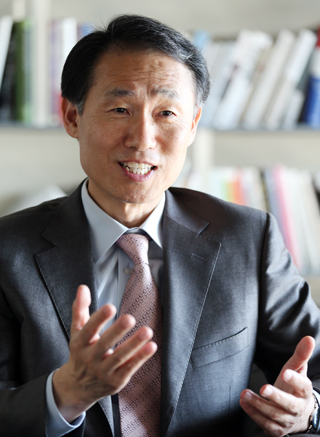 “Korea is the place in which the essence of Eastern thought - Buddhism and Confucianism - has blossomed to the fullest,” stated Yoon Dae-kyu, 60, vice president of Kyungnam University, in a recent interview.

“It is also the place where Christianity, a root of Western civilization, flourished most. Through dialectical integration, Korea possesses the grounds most ideal for a fusion of Eastern and Western ideas.”

Yoon spoke not as a man of religion but as a law professor who has researched law and society and North Korean law for the past 30 years.

Last week, he published a book entitled “The Uncomfortable Truth About North Korea,” which declared that Korea faces a golden opportunity of becoming a central nation in global society in the midst of a historical turning point in which the center of civilization is shifting from the West to East.

But the book is interspersed with concerns that the South is not able to overcome the last hurdle, the North Korea issue, rather than being able to make use of its natural advantages.

Yoon stated, “A fundamental reason that even after 60 years of ceasefire, the South is unable to rise out of the pit of the North Korea problem is because South Korea is going along with its wishful thinking and taking care of matters as they come along when dealing with North Korea.”

Instead of treating the problem through an accurate diagnosis grounded in reality, the South bases its North Korea policy on wishful thinking and expectations, which makes its policies ineffective and lacking in sustainability.

Yoon said while difficult to accept, the most important “uncomfortable truth” is that the North Korean system will not collapse as long as China doesn’t allow it to do so.

Regardless of the recent superficial changes that China has shown toward North Korea, he stated, at least in the near future, that there is no chance that Beijing will abandon Pyongyang.

Hence any North Korean policy with the premise that the North Korea system will collapse is bound to fail.

The only North Korean policy that can be effective is one that accepts the North Korean system and keeps the survival of North Korea as its premise, he added.

There is not much South Korea itself can do to resolve the nuclear issue, but in reality, he said South Korea should accept it and enable the North nuclear issue to be resolved under U.S. leadership, and play the role of proposing ideas while explaining its cause and motivations.