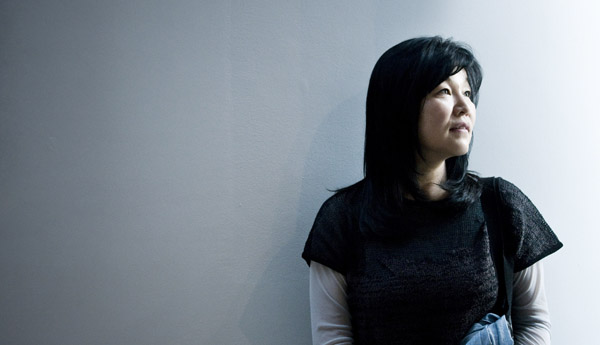 “I guess I’d be a flawed person in many ways if I didn’t become a writer. I just hope my books are worth something to someone,” novelist Shin Kyung-sook said. By Kwon Hyuk-jae

The author of the novel “Please Look After Mom,” Shin Kyung-sook, is a household name who blazed a trail for Korean literature. Since her debut in 1986, Shin has been acclaimed for her deep exploration of inner lives.

But it was “Please Look After Mom,” published in 2008, that propelled her to international fame. Selling over two million copies in South Korea alone, the book has been published in 33 nations and translated into 24 languages to date. To follow up such a hit, her 2010 book “I Will Be Right There” is also set to be translated and released in America next April.

Last year in March, Shin became the first woman and first Korean to win the annual Man Asian Literary Prize for “Please Look After Mom.” The story is centered on a family who searches for their missing rural mom who sacrificed her whole life for her kids, but later felt abandoned by her neglectful, grown-up children.

On such a glorious ride, Shin recently won the “Ho-am Art Award” from the Ho-am foundation, an award named after the pen name of Lee Byung-chull, founder of Samsung, and funded by Samsung that recognizes a Korean who has made an outstanding contribution to the development of science and culture.

As the recipient of the prize, she joined the ranks of the greatest Korean writers who earned the same award such as Park Wan-suh and Park Kyung-ni.

“I was at a loss for words after hearing the news because I thought the prize was only for senior writers. Maybe I unconsciously thought I am a young writer,” Shin said to a JoongAng Ilbo reporter.

But Shin is 50 with a 28-year writing career. So why does she identify herself as a young writer?

“While being a well-known writer in Korea, I suddenly emerged as a rookie writer internationally. The ambiguous position made me tense and forced me to go back to the basics,” Shin explained.

She attributed the overseas popularity of “Please Look After Mom” to its effective capture of an inevitable sense of loss through a missing mom as a narrative device. And she sees bright prospects in Korean literature despite the language barrier.

“Nowadays, young writers are publishing lots of books that vary in subject, which is the potential of Korean literature. Young writers are not obsessed with ideology unlike older generations. So they can delve into human beings and unleash their creativity,” Shin said.

The prolific writer is also working hard to expand her horizons. She traveled around the world for the past year.

She said “Wherever they go, writers always bring and reflect on what they felt in their pieces. I’m planning to write four episodes about people I came across abroad.”

The first outcome is “The Sealed Time” published in the spring issue of quarterly magazine “MunhakDongne.”

It tells the 30-year story of a former general and his poet wife who were abandoned by their homeland, Korea, in the wake of then-president Park Chung Hee’s death by assassination, while the couple stayed in America. Shin is also dealing with adopted Korean children she met in Norway in another novel.

Shin said she is writing to deliver the message that “nevertheless, humans are beautiful” and that’s why she thinks novels should provoke questions.

“A novel is what stands at the opposite side of faith. When everybody goes toward the same direction, I should see the opposite side of it. I think a novelist is one who formulates an edifice of a story in a refined, sophisticated way, so readers volunteer reason and raise questions or skepticism,” she said. “If novels come with clear answers, instead of questions, it isn’t fun at all.”