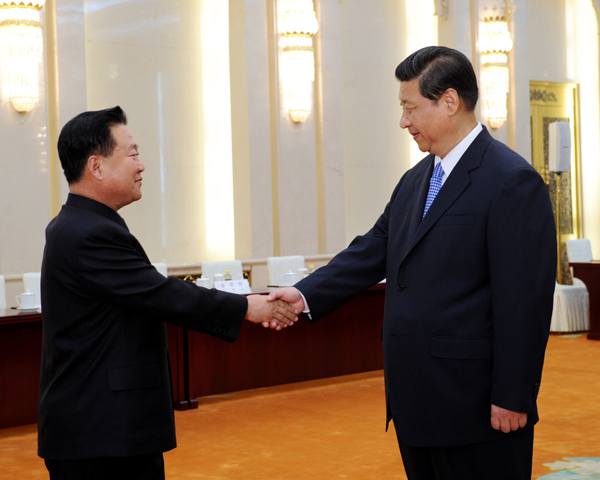 The special envoy of North Korean leader Kim Jong-un met with Chinese President Xi Jinping yesterday and said Pyongyang wants dialogue in various forms, “including a six-party talk” with other countries, in an apparent move to seek an exit from international pressure against the regime.

Choe Ryong-hae, director of the General Political Bureau of the North Korean People’s Army and a close confidant of leader Kim, met with Xi at the Great Hall of the People in Beijing, at around 4 p.m., according to China’s state-run Xinhua News Agency, and delivered a letter in Kim’s own writing to Xi.

“The DPRK [official name of North Korea] wants to resolve problems [regarding the Korean Peninsula] through dialogue and negotiations in various formats, including the six-party talks, making joint efforts with other countries,” Choe said, according to the media. “In order to safeguard peace and stability on the Korean Peninsula, the DPRK will make active efforts.”

Xi reaffirmed China’s backing for denuclearization on the Korean Peninsula, which means stripping North Korea of its nuclear weapons program.

“The position of China is crystal clear,” Xi said. “No matter how the situation changes, each concerned country should keep its principle to resolve problems through dialogue and maintain a goal of denuclearization, peace and stability on the Korean Peninsula.”

However, as of press time yesterday, it was unknown whether the North Korean delegation returned to Pyongyang.

Tensions on the Korean Peninsula are expected to lessen in the aftermath of the meeting, raising the possibility of six-party talks for denuclearization that have been stalled since 2008.

The meeting also raised hopes in Seoul for an inter-Korean dialogue, while all cross-border business was halted and official communication channels between two Koreas have been cut off.

Although the North Korean delegation arrived in Beijing on Wednesday, they had not been received by Xi until yesterday.

In fact, Xi was on a three-day trip to quake-hit Sichuan province, far from the capital. Political observers in Seoul say it was unusual for a president to leave the capital while an envoy was there.

Xi returned to Beijing on Thursday afternoon, which was the second day of the delegate’s visit. But he didn’t meet him that day, raising speculation that he could rebuff the North Korean delegation.

Yesterday morning, Choe also met with Fan Changlong, vice-chairman of the Central Military Commission of China in the morning, and expressed Pyongyang’s willingness to open up a dialogue with other nations, according to China’s Defense Ministry Web site and Xinhua.

“North Korea hopes to find a way for a resolution through mutual efforts and dialogue with other countries,” Choe said, cited by Xinhua.

Fan responded “China hopes neighboring countries will maintain their positions on resolving problems through dialogue and negotiation with a goal of denuclearization on the Korean Peninsula.”

Fan also pointed out that tensions on the Korean Peninsula are growing surrounding the matter of North Korea’s nuclear weapons program, which triggers conflicts among other countries and threatens peace and stability on the peninsula.

In the response to Choe’s remarks, Washington said if Pyongyang wants to open up a dialogue, they should abandon their nuclear weapons first.

“North Korea knows what it needs to do, the seriousness of the purpose it needs to show in terms of coming in line with its international obligations,” Patrick Ventrell, acting deputy spokesperson of the U.S. Department of State, said, when asked if denuclearization of North Korea is the precondition for talks between the U.S. and North Korea in the future.