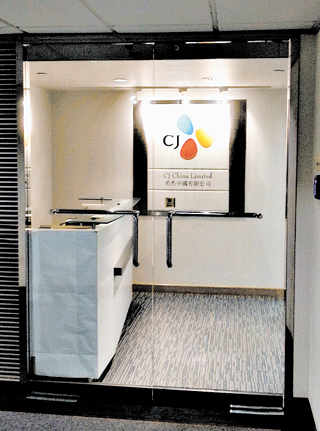 The entrance of CJ China, a branch office of CJ Group in Hong Kong. A reporter from the JoongAng Ilbo visited the office on Wednesday and found that four corporate entities of CJ in Hong Kong, whose address is the same as CJ China, were shell companies. By Kim Ki-hwan

CJ Chairman Lee Jay-hyun purchased an expensive piece of real estate in Tokyo under an assumed name with covert overseas funds, sources from the prosecution told the JoongAng Ilbo.

For days, the Seoul Central District Prosecutors Office has been probing CJ’s overseas accounts and releasing to the press allegations that Chairman Lee used the money abroad for various reasons, including bequeathing assets to his children and avoiding taxes on them.

According to the sources, special unit II at the Seoul Central District Prosecutors Office, which is in charge of the investigation, obtained circumstantial evidence that Lee purchased a building in Tokyo for 23.4 billion won using someone else’s name.

The sources said details of Lee’s finances were obtained from a separate probe into a former financial executive who managed Lee’s slush funds. The 2008 investigation was about the allegation that Lee’s asset manager had hired contract killers to murder a loan shark in 2007. During the investigation, the prosecution confiscated a USB drive containing details of the CJ chairman’s hidden funds.

Based on the information, the prosecution also found that Lee’s mother, Sohn Bok-nam, allegedly purchased massive amounts of long-term bearer bonds issued by the government around the time of the 1997 foreign exchange crisis. From them, 50 billion won was passed down to Lee and then his two children, the sources said.

The conglomerate said it does not have information on the alleged bequeathing of the bonds. “It appears that the bonds were purchased with private money, so we do not have accurate information because it is not related to the company,” a spokesman of the group told the JoongAng Ilbo.

The prosecution obtained warrants to look into the private bank accounts of Lee and his sister, Lee Mie-kyung, vice chairman of CJ E&M, in addition to 400 accounts created under other people’s names to manage the CJ chairman’s alleged hidden assets.

“Because there were some suspicious money dealings between the two, we secured the transaction records,” a prosecution source said.

The investigation so far also revealed that Lee’s funds managed through CJ Group’s eight companies in Hong Kong amounted to 350 billion won. A former Hong Kong corporate branch head identified by the name Shin was in charge of managing the money, the sources said.

The prosecution recently summoned Shin and the assets manager of Lee and questioned them.

“Because Shin recently came to Korea from Hong Kong, we barred him from leaving the country and investigated him along with the other asset manager,” the prosecution source said. “They are cooperating.”

The prosecution also prohibited at least six more CJ Group executives from leaving the country. Among the CJ owner’s family, only Chairman Lee was barred from overseas travels.

The prosecution also obtained records from the Financial Intelligence Unit at the end of last year implicating other businessmen, including Chairman Lee’s uncle Sohn Kyung-shik, a co-chairman of CJ Group and the head of the Korea Chamber of Commerce and Industry, and Kim Jin-soo, CJ president, the sources said. The unit informed the prosecution about suspicious money dealings within CJ Group, involving 10 people in particular, including Chairman Lee and Sohn.