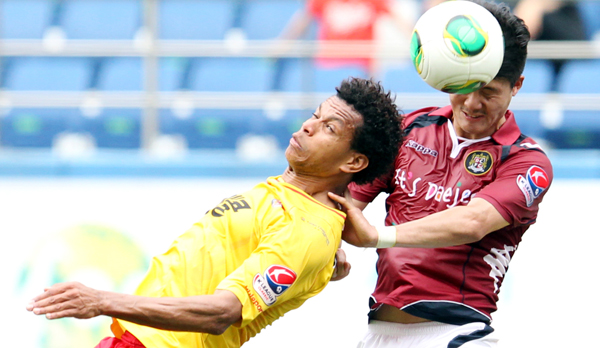 Cho Chan-ho scored twice, leading the Pohang Steelers’ 4-2 demolition of Daegu FC in a K-League Classic duel between the leader and bottom-dweller at the Pohang Steelyard yesterday.

Song Chang-ho and Lee Ji-nam scored for Daegu, which never led in the match, as Pohang again denied Daegu its first victory. With his fourth and fifth goals of the season, Cho, a 27-year-old forward, pushed aside Ko Mu-yeol (four goals) as the team’s leading scorer. Shin Jin-ho and Bae Chun-suk also netted for the hosts.

Defender Jung In-whan struck twice as the Jeonbuk Motors claimed three points from Gangwon FC in an away match yesterday. Lee Dong-gook scored his fifth goal of the season, extending his league record for most career goals to 146.