GYEONGJU, North Gyeongsang - It was almost a year ago that Kim Ki-chang, a veteran diver who has more than 28 years of experience under his belt, came across a seemingly uncommon and storied metallic object in the deep water of Korea’s East Sea.

He was looking for some fishing gear that he had lost, so he went into the water off the Yangpo Port in Pohang, North Gyeongsang. He was on the ocean floor - about 25 meters (82 feet) deep - when he suddenly saw a large, dark object.

“It was round and it was lying down on the ocean floor,” he reminisced. “At the moment, I thought it could be a cylinder-shaped ventilating opening of a ship.”

The opening was taller than he was. Also, as he felt the object with his hands, he realized it was so thick that he couldn’t grip it.

The surface was relatively clean, Kim said, but its top was corroded and had a lot of foreign substances stuck on it. He couldn’t make out exactly what the object was. 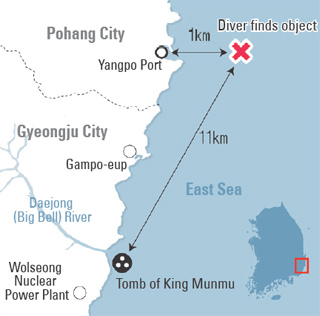 Several months after that incident, Kim saw a TV documentary on the eighth-century Big Bell of Hwangnyong Temple, and it occurred to him that what he saw in the deep sea months ago may be that bell.

And he sifted through more historical documents and materials on the bell. The result? His gut feeling turned into a conviction. He bought a boat, then an underwater camera that cost him 8 million won ($7,112). He wanted to confirm the bell with his own eyes before making a report to the relevant authorities.

But as he did not keep a record of the axis of coordinates where he first spotted the object, his attempts to find it again failed. Still, he reported to the Cultural Heritage Administration on April 8 what he saw.

The National Research Institute of Maritime Cultural Heritage ? which operates under the Cultural Heritage Administration ? deemed that as Kim’s testimonies were very detailed, there may be some credibility as to what he saw. And they initiated a preliminary underwater exploration off of Yangpo Port in Pohang.
This story was revealed to the Korean media in early May by the Gyeongju government. “Although nothing has been confirmed yet, based on the historical tales there is a possibility that the object could be either the Big Bell of Hwangnyong Temple or the Big Bell of Gameun Temple,” said Choi Yang-Sik, Mayor of Gyeongju.

So what was it that Kim saw? And what makes some people believe that the object could be a bell from the Silla era (676-935)?

There are two tales that have been passed down through the generations in Korea concerning bells that were sank underwater and lost for good: one on the Big Bell of Hwangnyong Temple and the other on the Big Bell of Gameun Temple. 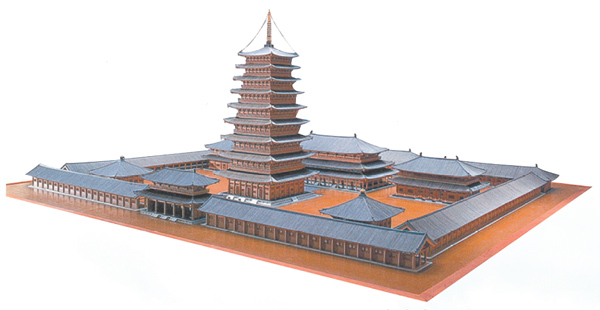 Below, the current site of Hwangnyong Temple is designated Korea’s Historic Site No. 6. During an excavation conducted between the 1970s and 1980s, some 40,000 important relics were uncovered. The temple, as recreated above, was believed to be one of the largest and most magnificent in Asia.[JoongAng Ilbo]

First, according to Volume III of the Samgukyusa (“The Heritage of the Three States”), King Gyeongdeok of the Silla Dynasty cast the bell for Hwangnyong Temple in 754. It was 3.12 meters tall, 27 meters thick and weighed 108.5 tons.

The record further says that an aristocrat named Lady Sammo made the donation for the bell, and a technician named Lee Sang-taek made the bell. The bell was re-cast sometime between 1095 and 1105 and it was 2.06 meters tall.

You Hong-june, professor of art history at Myongji University and a renowned writer and commentator on folk art, also mentioned the bell in his book, “My Exploration of Cultural Heritage.” He said after the Mongols burned down the temple - one of the largest in East Asia - in the early 1200s, they attempted to take the bell to their country.

But it was too heavy - about five times heavier than the Sacred Bell of Great King Seongdeok (also known as Emille Bell), which is the largest bell existing in Korea now. So carrying it on a boat by the sea route was the only option. But legend has it that they dropped it during their voyage and that the bell probably is somewhere in Korea’s eastern sea due to currents. 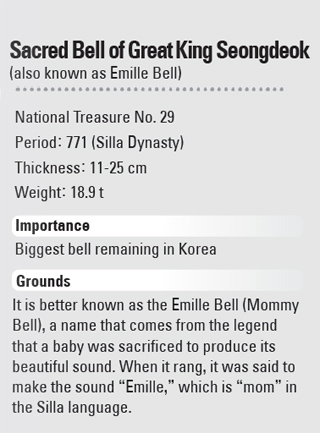 That is why Koreans have called the river near the site, Daejong River or Big Bell River.

The second tale concerning a bell that sank in Korea’s eastern sea is about the Big Bell of Gameun Temple. The temple was also built during the Silla era, in 682. It’s unclear when the bell was cast. There is a tale that during the Japanese invasions of Korea known as the Imjin War (1592-98), the Japanese burned down the temple and stole the big bell. But the ship that they were using to transport the bell sank due to high waves and the bell sank with it.

In fact, these tales prompted the Korean government and the navy to conduct underwater explorations in 1980 and 1997 in Korea’s eastern sea near Gyeongju. But they didn’t find anything. And it’s unclear when the third round of underwater exploration will take place, as the National Research Institute of Maritime Cultural Heritage failed to find the object believed to be a bell in its preliminary investigation between mid-April and early May.

“Because the view was poor and the current was too strong, we concluded our preliminary investigation,” Moon Hwan-suk, manager at the institute’s underwater excavation and conservation division, told the Korea JoongAng Daily. For about a month, four professional divers scanned the area Kim reported about, in addition to using other underwater equipment for the operation.

“Perhaps we will resume the investigation in the summer or fall, when the view is better and the current is weaker,” he said. In the preliminary investigation, the National Research Institute of Maritime Cultural Heritage used a 19-ton vessel.

Meanwhile, the lawmakers based in Gyeongju collectively called on the Gyeongju government as well as the central government on May 16 to put in more efforts to find the bell. “There is criticism that the National Research Institute of Maritime Cultural Heritage is neglecting the exploration, using only a small vessel and a limited number of divers.”

On this, Moon explained it is because the institute is engaged in a large-scale exploration in the waters off of Jin Island and once that’s over they will put more effort into finding the bell. He added that then they should be able to use the 290-ton vessel that the Korean government introduced in December of last year solely for underwater archaeology, alleged to be the largest in Asia.

Korea is known to be quite strong and invested in underwater archaeology. The government claims to be the best in Asia. In addition to the exploration in the waters off of Jin Island where they found some important Joseon-era weapons and ceramics, the National Research Institute of Maritime Cultural Heritage has conducted a survey on an 800-year-old shipwreck near Taean’s Mado Island, South Chungcheong, after getting a tip from haenyeo, female divers.