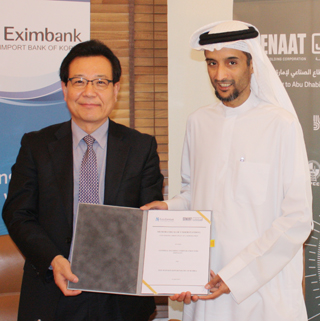 The Export-Import Bank of Korea (Eximbank) has taken initiatives to assist Korean companies expanding in the Middle East and Turkey. As part of the strategy, bank officials toured Turkey, Saudi Arabia, the UAE and Qatar in April with a eye toward tailoring marketing plans for each individual country.

The Middle East region accounts for 57 percent of overseas construction by Korean companies, or $36.9 billion of the $65 billion in orders received last year.

Bank officials visited the Turkish investment support and promotion ministry, which recently placed many orders for airport, seaport, roads, hospitals and other major infrastructure projects. The delegation persuaded Turkish officials to open door wider for Korean companies, appealing to the bank’s willingness to offer funds. Over the next 10 years, the ministry will oversee 21 infrastructure projects to be built through joint efforts between the private sector and government institutions.

Especially with a Korea-Turkey free trade agreement taking effect this month, the two state-run institutions have agreed to increase the credit line provided by the Korean bank to the Turkish financial institutions to support businesses involving Korean companies in the Turkish market.

“We expanded our target Middle East to include Turkey, which has high growth potential in trade and infrastructure construction, and tried to form a strong network with core ordering companies,” said Sul Young-whan, Eximbank senior executive director. “We will continue to approach new markets like South America and Africa in order to help Korea stay strong in exports and advance overseas.”

The team also made a trip to the UAE, visiting the Mubadala national fund and Union National Bank to discuss possible measures to mobilize local funds for large-scale projects that involve Korean companies.

To follow up on the trip and further expand relationships, the bank invited major financial institutions and utility companies from the Middle East and North Africa to visit Korea. And the bank held a conference in Seoul with a theme of the changing dynamics of the two regions.

“Now is the time when worldwide cooperation is crucial,” said Choo Kyung-ho, vice minister of strategy and finance. “The Korean government is expanding businesses while fulfilling the needs of our partners. We will strengthen the relationship with Middle East and North Africa countries in the spirit of a creative economy.”

Eximbank President and CEO Kim Yong-hwan said the bank will provide all possible financial support to help Korean companies to help them achieve horizontal growth in which they can handle planning, investing, construction and management.