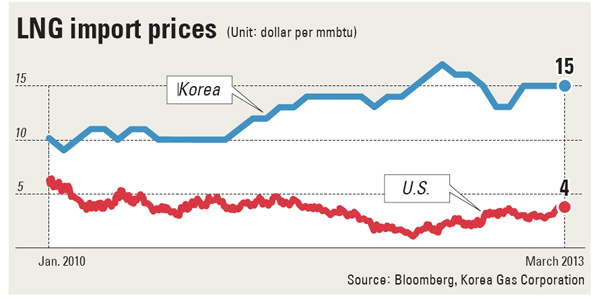 Will opening the natural gas import market, which is 97 percent controlled by Korea Gas Corporation, to private companies further raise prices or benefit the national interest?

Korea Gas said keeping the current system that gives buying power to the state-run corporation as a single purchaser will bring in gas at cheap prices, but it turns out that SK E&S imported 1 ton of liquefied natural gas (LNG) from Indonesia at 399,145 won ($360), while Korea Gas spent 928,267 won for the same gas, according to a report obtained by the JoongAng Ilbo.

SK E&S has been directly importing 600,000 tons of LNG annually from Indonesia since 2004.

It generates electricity through a 1,000-megawatt LNG power plant in Gwangyang in South Jeolla and sells it to Korea Electric Power Corporation (Kepco).

According to an insider report by the Ministry of Trade, Industry and Energy on expanding direct gas imports, SK E&S imported LNG at $4 per million BTU and generated electricity. This helped Kepco save 123 billion won last year alone, it said.

Posco, which has been importing 550,000 tons of LNG annually since 2004, also pays much less than Korea Gas. 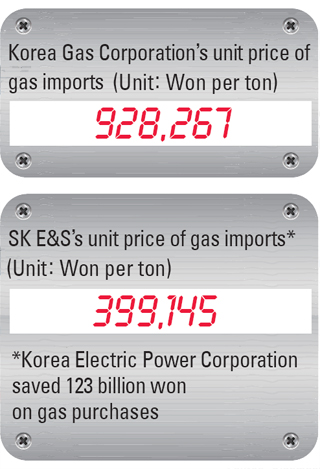 "After Japan’s earthquake and tsunami-triggered nuclear crisis, Asia went from a buyer’s market to a strong seller’s market,” said Lee Jae-won of the Korea Gas planning team. “Unlike private gas importers that bring in small amounts of gas, Korea Gas Corporation takes care of most of the necessary amount of gas imports in the country. It has no option but to get the gas even at a high price. Giving the gas corporation the power as a sole gas purchaser has more advantages in terms of importing gas at a cheap price.”

But the government report reached a different conclusion, saying that a large quantity does not always bring down the unit price.

The fact that Korea Gas needs a large amount of gas as a sole purchaser is actually a disadvantage in negotiations, experts said.

“Private direct importers are signing relatively cheaper contracts by importing 500,000 to 800,000 tons of gas,” the ministry said in the report. “It will be efficient for the country to [encourage more] direct imports [by private importers] as they give Korea Gas Corporation a clear goal and motivation, which as a result pressures it to find ways to import gas at cheaper prices.”

The issue surrounding expanding direct imports is likely to spark heated debate in the National Assembly.

The revision bill is scheduled be put on the agenda at the National Assembly’s standing committee in June. If the revision is eventually passed, Korea Gas would have to compete with private companies.

The Korea Gas labor union lashed out at the proposed legislation, saying it would benefit conglomerates and end any chance of reducing gas bills for the general public.

Past attempts to introduce competition into the country’s natural gas import market have failed due to strong opposition from the Korea Gas labor union and some politicians.

The Korea Gas monopoly and its disadvantage in negotiating natural gas prices have caused LNG import prices in Korea to shoot up at a time when prices in international markets have plunged due to U.S. production of shale gas.

In the same period, residential gas bills have surged 47 percent to 859 won per cubic meter from 586 won.

“Korea Gas Corporation is a monopolistic body that passes gas import costs to consumers and there are fundamental limits to the company’s efforts to cut costs,” said Representative Kim of the Saenuri Party. “Korea is the only country in the OECD that guarantees a gas monopoly.”

“A competition system would bring down gas import prices and stabilize electricity and gas bills,” Cho said. “This will not only generate a positive effect on local industries, but also on stabilizing consumer prices.”