Kepco powering up with latest project in Jordan

Kepco powering up with latest project in Jordan 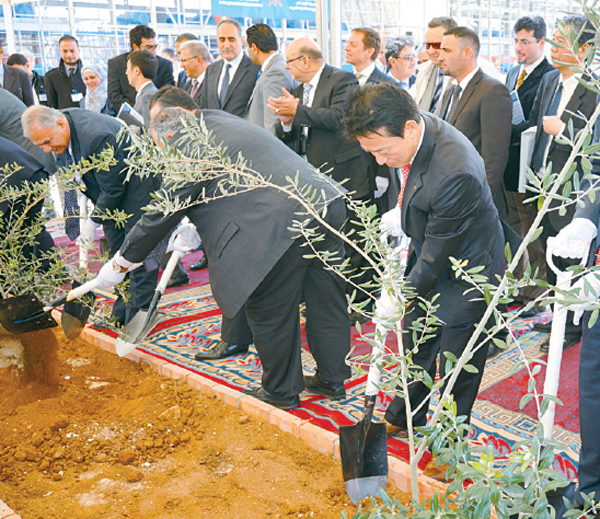 More than 250 officials participated in the groundbreaking last month for a power plant to be built in Jordan by Korea Electric Power Corporation.

Korea Electric Power Corporation began a power plant construction project worth $800 million in Jordan last month. It is the third independent power producer project for Jordan and the second collaboration with Kepco.

The groundbreaking ceremony on April 22 was attended by Kepco executives, Jordanian Prime Minister Abdullah Ensour, Jordan’s minister of energy and mineral resources, the CEO of the country’s national power company and about 250 other officials.

As financial difficulties emerged after Jordan’s request for a relief loan from the International Monetary Fund, Korea Export-Import Bank joined the project as a co-financer along with Nippon Export and Investment Insurance of Japan and other international banks. Financing was achieved based on the reliability of the project itself and required no surety, an indication of the project’s quality.

Contractor Lotte E&C helped several small and medium enterprises in Korea by using equipment they manufactured. That resulted in $150 million in sales.

The strategy of cooperation helped the Korean consortium beat out competitors ACWA Power and Saudi Oger from Saudi Arabia. It further propelled Kepco’s expansion into the Middle East’s independent power project market (IPP). Among Korean companies, Kepco was an IPP pioneer in Jordan, with construction of its first plant in Al Qatrana completed early last year.

Kepco will operate the plant until 2039 and is expected to recoup $1.6 billion. While the company is No.1 shareholder, owning 60 percent of total, it should eventually more than double the initial investment.

The plant is located in Al Manakher, 30 kilometers (18.6 miles) east of Amman, the caoital. It is scheduled to begin operation in February.