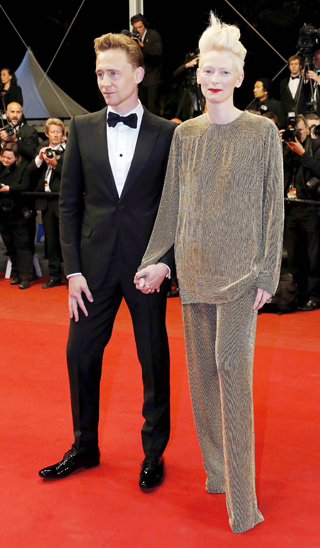 CANNES, France - Tilda Swinton injects her own brand of otherworldly-cool into Jim Jarmusch’s latest movie, “Only Lovers Left Alive,” an unusual comedy that puts a spin on the age-old vampire genre.

The film, the last English-language entry competing for the Cannes Film Festival’s Palme d’Or, sees Swinton play Eve, a grungy but erudite vampire who’s married to a forlorn vampire musician, Adam, played by Tom Hiddlestone. Several-hundred-year-old Adam ? of Biblical fame ? has been living quite happily ever since being expelled from the Garden of Eden.

That is, until the 21st century came along with its excesses and greed and pushed him into a full-flung existential crisis. He cracks, and orders a wooden bullet to kill himself.

With such a wacky plot, it’s no surprise the film nearly didn’t get made. It took seven years to find a backer ? which Jarmusch says is because producers won’t take creative risks anymore.

“I wanted to make a vampire love-story ... The reason it took so long was that no one wanted to give us the money. It’s getting more and more and more difficult for films that are maybe a little unusual or not predictable or not satisfying the expectations of everybody which is the beauty of cinema, discovering new films of all forms.”

He added: “But look, now we’re here at Cannes.”

Swinton said the film provided a unique opportunity to reinvent the vampire genre.

“There’s a feeling of beautiful luxury about approaching this kind of portrait, because you can come with a Martian’s-eye view ... We were able to create our own lexicon,” she said.

For instance, in the film the vampires elegantly cover their mouths and have a strange ritual with gloves that goes unexplained.