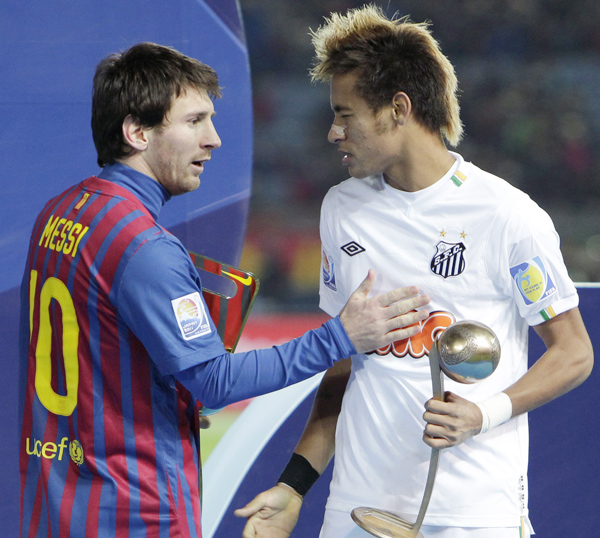 SAO PAULO - Neymar said Saturday he will be joining Barcelona after the Confederations Cup, the latest addition to a star-filled roster that already includes four-time FIFA Player of the Year Lionel Messi, Xavi Hernandez and Andres Iniesta.

The decision came a day after Neymar’s Brazilian club, Santos, said it had accepted offers from Barcelona and Spanish rival Real Madrid, and that it was up to him to pick where he wanted to play.

“I wouldn’t be able to wait until Monday. My friends and my family already know of my decision,” he wrote. “On Monday I will sign a contract with Barcelona.”

“FC Barcelona have reached an agreement with Santos for Neymar,” the club said. “The Brazilian player will join FC Barcelona for the next five seasons.”

The club offered more praise on its Web site, calling him “one of the most promising footballers on the planet.” Messi was quoted as saying earlier this week that Neymar would be “a wonderful signing” for Barcelona.

Neymar didn’t give any details on the offer he and Santos accepted from Barcelona. He will play his last game with Santos on Sunday in the team’s opener in the Brazilian league.

“I want to thank Santos fans for these nine incredible years. My feelings for the club and the fans will never change,” he said. “I made sure that I play [this last match] so I can have the opportunity to once again enter the field wearing the team’s jersey and to hear the fans chant my name.”