Sales of air-conditioners heating up

Sales of air-conditioners heating up 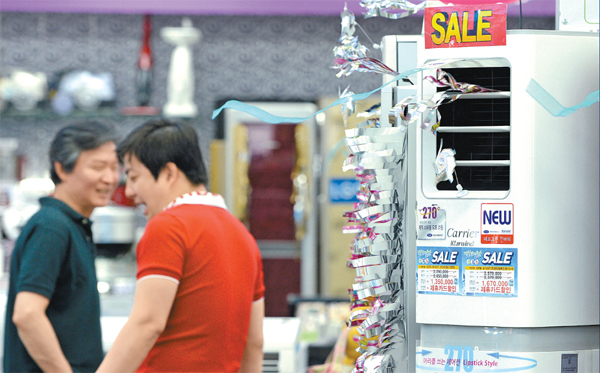 As daytime temperatures recently have been climbing higher than previous years, orders for air-conditioners and other heat-reducing products are rising fast.

The electronics companies expect sales of air-conditioners to reach a new record by the end of this month.

Some retailers are already having problems filling orders as demand exceeds production.

According to the Korea Meteorological Administration, mercury rose as high as 28 degrees Celsius (82.4 Fahrenheit) yesterday. It was the same for Seoul as well.

“I was out playing with my daughters at Olympic Park [in Jamsil, southeastern Seoul] while attending this painting competition,” said a Jamsil resident who wished only to be mentioned as Lee. “But the heat was intense,” he said, adding that he is really thinking of turning on his air-conditioner later that night.

As people are already turning on their air-conditioners and other cooling devices, electricity suppliers are alarmed.

Korea Power Exchange said that as of 3 p.m. Friday, 6,146 kilowatts of energy were used. This is the largest amount of energy used in a day this month.

But as the heat wave is expected to continue, the electronic appliances industry expects more consumers to rush to stores to buy air-conditioners.

Electronic consumer goods companies such as LG Electronics, Samsung Electronics, Carrier and WiniaMando saw sales more than double or triple in the first five months of this year compared to the same period last year, according to industry insiders.

The electronics companies say that consumers who didn’t buy an air-conditioner during one of Korea’s worst heat waves, between July and August last year, are now rushing to stores to purchase one. Last year, as temperatures shot up, some stores, including Hi-Mart, an exclusive consumer electronics distributor, ran out of air-conditioners.

As a result, major electronics companies are already running their production facilities at full capacity this year. But they say they have been unable to meet the demand, as orders have been pouring in since the middle of this month.

“We are operating the air-conditioner production facility in Gwangju at its full capacity, in preparation for the peak summer season of July and August,” said a spokesman for Samsung.