North’s war of words rages on

North’s war of words rages on 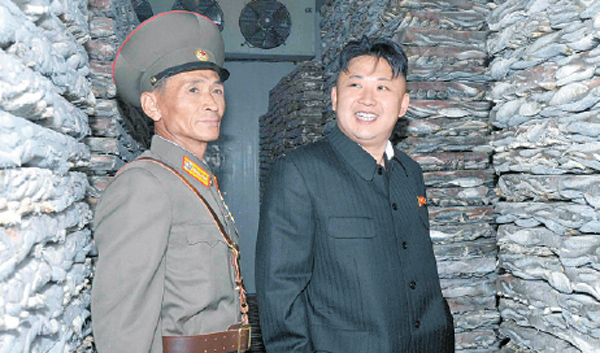 Kim Jong-un, right, visits a supply base at an undisclosed east coast location in this picture released yesterday by the Korea Central News Agency. [REUTERS/NEWSIS]

Just as a senior North Korean envoy’s visit to Beijing seemed to open the way for a resumption of six-party talks, Pyongyang lashed out at South Korea again, referring to President Park Geun-hye by name for the first time.

“President Park personally mentioned our great [leader Kim Jong-un] and is spreading imprudent, thoughtless remarks such as that we cannot accomplish developing economy and nuclear armament simultaneously,” stated a spokesman for the National Defense Commission, the top military decision-making body of the North. He called her remarks “plainly confrontational.”

This is in response to comments Park made last Thursday, mentioning the North Korean leader by name.

“Kim Jong-un has continued his risk-taking by escalating tensions on the peninsula,” Park said during her meeting at the Blue House with a group of experts from the Center for Strategic and International Studies.

“And now he started another new gamble by seeking to develop the North’s economy while holding on to nuclear arms development at the same time,” she said. “I believe he can never succeed with this attempt.”

The North’s Committee for the Peaceful Reunification of Korea, which is responsible for inter-Korean relations, issued a statement Saturday criticizing Park as “mentally deranged” for her “reckless provocations.”

North Korean Vice Marshal Choe Ryong-hae’s three-day visit to Beijing was thought to be a bridge-mender to draw the North back into six-party talks with South Korea, China, the United States, Japan and Russia. The talks ended when North Korea walked away in 2008.

Choe conveyed a handwritten letter from Kim to Chinese President Xi Jinping on Friday. He emphasized the countries’ unparalleled alliance and indicated Pyongyang’s willingness to follow in China’s lead and open dialogue with relevant parties, including the dormant six-party talks.

Xi, afterward, stated that China urged North Korea to resume dialogue with other countries and denuclearize. Chinese experts said Beijing, however, will not be so ready to welcome Pyongyang back to the talks without an indication of its willingness to give up on its nuclear ambitions.

“The six-party talks have to set as a goal denuclearization [of North Korea],” a high-ranking South Korean government official who requested anonymity stated yesterday. “What’s the point in holding six-party talks without having faith that [the North] will denuclearize? We have to be careful to watch if after President Xi’s meeting with Choe the North Korean side announces there was no discussion of six-party talks.”

Another government official echoed that position. “Though it is not easy for dialogue to happen, only with the prerequisite of denuclearization, can dialogue be a mechanism for denuclearization.”

Park conveyed to John Hamre, president of the Center for Strategic and International Studies, and his delegation that her Northeast Asia peace policy encompasses the belief the North Korea problem has to be resolved in a bigger arena.

“Depending on North Korea’s situation, through a trust-building process on the Korean Peninsula we will continue providing humanitarian aid to the North,” said a key foreign affairs official in the South. “Through cooperation for peace in Northeast Asia, the six-party talks will start off by excluding political issues and building solidarity. This would also put roundabout pressure on North Korea.”