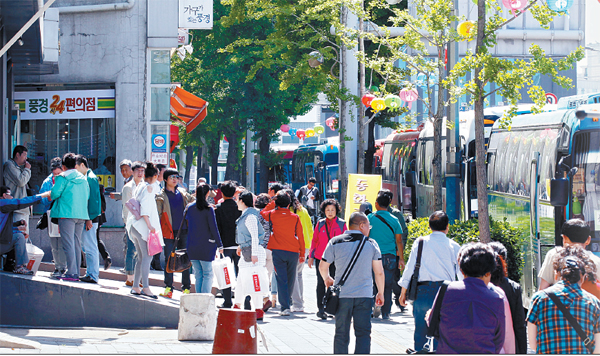 A group of tourists carrying herbal products leaves a store that mainly caters to foreign tourists. Travel agencies pocket commission fees from those stores in exchange for bringing in tourists. By Kim Seong-ryong

An 18-year-old Thai woman surnamed Saebang was excited when she arrived at the Incheon International Airport for a four-day tour of Korea.

Her parents covered the cost of the trip because she was admitted to a dental college at Prince of Songkla University in Southern Thailand.

There wasn’t much burden on her parents as they chose a tour operator that offers a cheap, all-inclusive tourism package that only costs 900,000 won ($810) for the four days and three nights.

Many tourism agents in Southeast Asia signed a partnership with Korean operators to lower the prices.

But the visitor’s expectations turned into disappointment when she and her family members were given low-end food and pushed by their guides to purchase promotional sales products.

The champagne was on ice when the number of tourists visiting Korea surpassed 10 million last year. 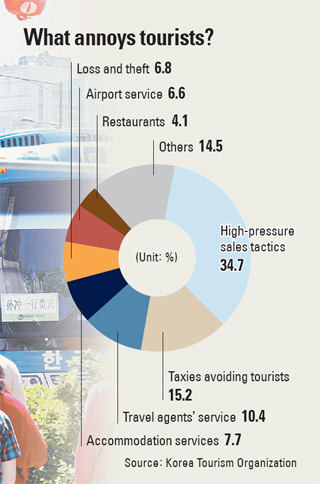 But many are concerned that the growing number of low-cost tourism packages like the one Saebang experienced will likely tarnish Korea’s image as they offer cheap food and force tourists to buy promotional products.

Some of the travel agencies sometimes even skip the sightseeing and take tourists to shopping centers instead, forcing them to spend most of their time there.

Another Thai tourist with the family name Jirapraditkul, who registered for the same package, complained that too many shops - cosmetic, grocery and herbal, among others - are added to the destination list.

“I wanted to go to Hongik University or the Gangnam area, which frequently appears on Korean dramas,” said Jirapraditkul after spending one and half hours at a store selling amethysts in Yeouido, western Seoul.

“It’s disappointing. The guides didn’t give us any free time to look around,” the 23-year-old visitor said.

A fruit from an oriental raisin tree, known for its heath-enhancing properties, sold for 440,000 won per bottle at one of the stores, whereas the same product is available for 196,000 won on online shopping Web sites.

“I heard this fruit is really good for health,” said a Chinese tourist who bought the item.

“I think it’s a little expensive, but the guides said it deserves the high price tag,” said the tourist.

The guides leading the bargaining package cashed in on travel times on the bus, promoting such diverse products as strawberries, dried persimmon and dried seaweed.

But far less consideration was given to the sightseeing moments. Tourists had to move from Gangneung, Gangwon to Yongin, Gyeonggi and all the way up to Seoul within a day. They were given only 30 minutes to one hour to take a look at each national landmark.

The skewed schedule is caused by travel agencies in desperate need of the proceeds from the sales because the low-end packages leave them with little revenues.

“This is more of a structural problem. We need the government intervention to offer more decent itineraries and regulate those failing to meet the standards,” the researcher said.

The government, however, is not authorized to keep a database about travel agencies because the law revised in 1994 freed the operators from informing the details of their businesses.

Some reports also highlight the fact that the quality of Korean tourism doesn’t go hand-in-hand with the increased volume.

A report entitled “Travel and Tourism Competitiveness Report 2013” from the World Economic Forum (WEF) compiled a list of which countries are attractive and competitive in the travel and tourism industry.

It pointed out that Korea’s tourism sector is not being developed in a sufficiently sustainable way.

Industry experts note that now is the time to focus on quality tourism to lure regular travel-goers, rather than once-in-a-life-time visitors in order to drive the tourism boost over a longer period.

“These kind of packages can undermine the image of Korea and will ultimately lower the tourism industry,” Kim said.