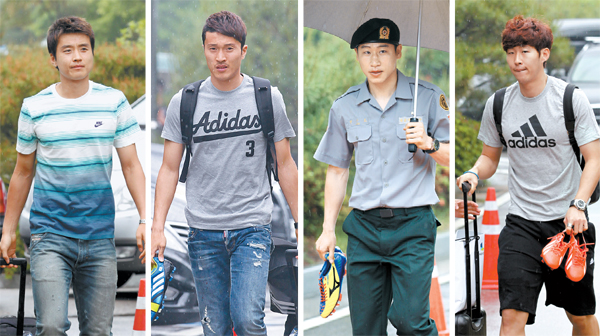 The national team coach, beleaguered by recent slumps that have threatened Korea’s eighth consecutive World Cup berth, gathered players at the national football center in preparation for the qualifiers, starting with a Lebanon match next week.

“We sometimes showed a good play, sometimes a bad play, but, if I say it, that becomes an only excuse,” Choi said at the football center in Paju, north of Seoul. “First, I need to show it with the results, together with the players gathering here.

“We will put the slump behind us and get prepared to show a good performance consummate to the Korean national team.”

Korea yielded its leading position in Group A, after two straight losses against Uzbekistan and Iran in September and October. It collected three points with a 2-1 victory over Qatar in March, but is still trailing Uzbekistan by one point while Iran and Qatar are three points behind.

Only the two best teams in the group will directly qualify for the Rio de Janeiro World Cup, and Korea’s fate will likely remain undecided until its final qualifying match against Iran in Seoul on June 18. Korea will play Lebanon on June 4 and host Uzbekistan on June 11. Lebanon, in last place with four points, is a must-win opponent, Choi said.

Choi’s squad will leave for Dubai today, train there for three days, and leave for Lebanon on June 1. The Lebanon match, the only away match for Korea, will be held on June 5 at 2:30 a.m. Korean time at Camille Chamoun Sports City Stadium in Beirut.

“The home matches are not easy as well, but the final away match is important,” Choi said. “Other teams struggled at Lebanon. We are not in a situation to keep everything prepared in a perfect orderly way, so I think the key to the preparation during the rest of the time is how much we are creating a mood and improving the physical conditions. We have to win the Lebanon game at any cost. Of course a game in the Middle East is difficult. But, we have to endure it. The players are experienced, and I think they need to overcome with their know-how and experiences.”

Choi will have to overcome a hole in the midfield against Lebanon. Ki Sung-yueng of Swansea City will sit out the game due to cumulative fouls, while an injury will keep Koo Ja-cheol of Augsburg from playing.

Park Jong-woo will also sit out the Lebanon match as he serves a two-game ban imposed on him for holding the “Dokdo is our land” banner in a Japan match during the 2012 London Olympics.

Kim Nam-il, a member of the semifinalist 2002 FIFA World Cup team, will help fill the vacuum. The 36-year-old midfielder made the national team for the first time since the 2010 South Africa World Cup thanks to his rejuvenated play in the K-League.

Choi expressed his trust in Kim.

“There are the players that are helpful in the team only for their existence,” Choi said. “If Kim Nam-il shows what he has shown with his club, I think he will do well with the national team.”