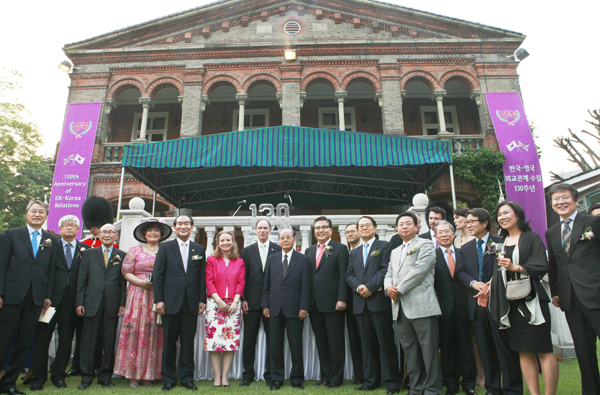 Dignitaries shown above are among the hundreds of businessmen, politicians, military officials and scholars who came to celebrate Queen Elizabeth II’s birthday and 130 years of diplomatic ties between Korea and the United Kingdom in the gardens of the British Embassy in central Seoul on Thursday. By Park Sang-moon

More than 500 guests from government, business and academia gathered to celebrate Queen Elizabeth II’s birthday - and 130 years of diplomatic ties between Korea and the United Kingdom - on Thursday, in central Seoul.

British Ambassador to Korea Scott Wightman greeted the guests to his residence first in Korean, and then stated, “As you all know, last year was a really big year for the United Kingdom.”

Last year marked the 60th year of Queen Elizabeth II’s ascension to throne. The Diamond Jubilee was marked by celebrations around the world, along with the London Olympics.

Queen Elizabeth II celebrates 61 years of service to the people of the United Kingdom and the Commonwealth, said Wightman, and added, “Of course, we are all looking forward to the birth this summer of Her Majesty’s great-grandchild.”

Diplomatic ties between the U.K. and Korea date back to 1883 when the two countries signed a treaty in Gyeongbok Palace. Hence the British Embassy, next to the ambassador’s residence, has stood next to Deoksu Palace in the heart of Seoul since the late 19th century.

“The U.K.-Korea relationship is now based on shared economic and political values. It grew over the past five years and I’m confident it will strengthen further under President Park Geun-hye,” added Wightman.

Following the visit of British veterans of the 1950-53 Korean War, who visited Korea last month upon the invitation of the Korean government, Minister of Patriots and Veterans Affairs Park Sung-choon in his official welcoming speech stated, “Her Majesty Queen Elizabeth II is not only held in great esteem by the people of the United Kingdom and the Commonwealth but also beloved by people in the rest of the world.”

“Queen Elizabeth II has supported the Korea-U.K. alliance since she ascended the throne in 1952, and the UK sent the second largest number of troops after the U.S., as many 56,000 soldiers, to the Korean War,” Park added. “They fought gallantly at the Battle of Kapyong and Imjin River [in April 1951].”

“South Korea is committed to fostering and strengthening the blood alliance between our nations by continuing to invite the U.K. and Commonwealth Korean War veterans as well as their descendants to express our respect and appreciation and by delivering clear understanding of the sacrifice of the veterans to the future generation.”

The Korean War Armistice Agreement was signed on July 27, 1953, and more U.K. veterans are expected to visit the country next month and in July to mark the 60th anniversary of cease-fire between the two Koreas.