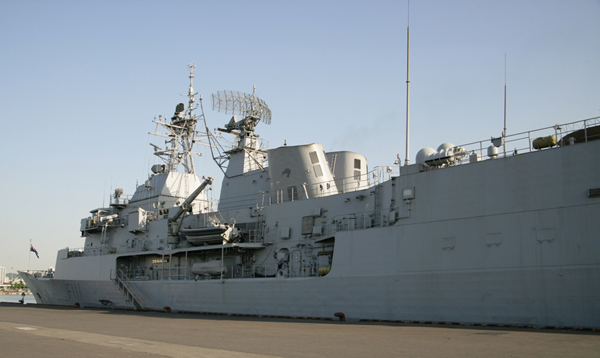 HMNZS Te Mana, a frigate of the Royal New Zealand Navy, docked in Incheon May 15-19. Provided by the New Zealand Embassy in Seoul

The Royal New Zealand Navy made its triennial visit to Korea last week with one of its two frigates - HMNZS Te Mana - as a part of a four-month, nine-stop defense diplomacy tour of the Asia-Pacific region.

At a function last Thursday aboard the Te Mana last Thursday evening, about 100 Korean dignitaries from the military, government and business were hosted by New Zealand Ambassadorto Korea Patrick Rata and Cmdr. Shane Arndell, the ship’s commanding officer.

Also in attendance were defense attaches and other military representatives from Argentina, Australia, Japan, Indonesia and the United States.

They were greeted by a powhiri, a traditional Maori welcome ceremony performed by the ship’s cultural group. The group then entertained with several kapa haka (traditional Maori song and dance) items.

Hong Il-pyo, of the Saenuri Party, described the performance as “simple,” “powerful” and “authentic.”

Rata said the event was “a great way to showcase the important role our close defense ties play in our wider bilateral relationship.” He pointed out that Korea and New Zealand have had a military relationship since the 1950-53 Korean War, when New Zealand provided ships to the United Nations command.

Arndell said it was a great opportunity to showcase New Zealand wine, beer and food, including cheese, crayfish and whitebait patties.

While in Korea, the ship’s 176 personnel, who prefer rugby, participated in a soccer game. The last New Zealand naval ship to call in Korea was the HMNZS Endeavour in 2010.