Peace Festival at DMZ gets its message across

Peace Festival at DMZ gets its message across 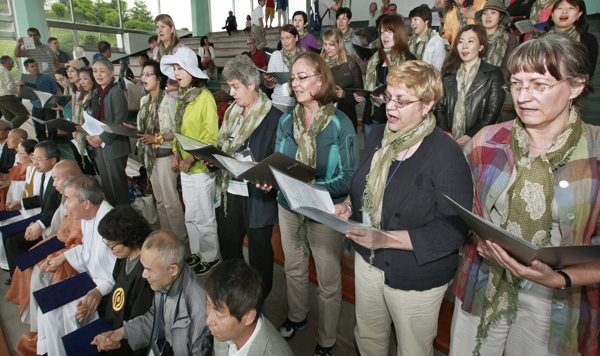 DMZ, Gangwon - The Seoul International Women’s Association (SIWA), whose membership consists largely of spouses of ambassadors in Korea, held an event to promote peace at a most appropriate location: the Demilitarized Zone.

The DMZ Ecological Peace Festival offered a two-day DMZ tour last weekend, where SIWA members served meals for soldiers and presented a choral concert to commemorate the 60th anniversary of the creation of the heavily fortified area.

A group of religious leaders also gathered for the event to read a “Peace Declaration” intended to ease tension on the Korean Peninsula.

“We all know the soldiers really work hard to protect us,” said Lee Bock-hee, vice president of the SIWA. “Our organization thought long and hard about what we can do for the soldiers. Most of the members are mothers. So what first came to our mind was serving meals for them.”

“We discussed which food is appropriate for the soldiers based in the DMZ,” said Yulia Saveleva, a member of the organization who works for the Embassy of Ukraine. “We finally decided to serve Korean beef, which is good for health and has a rich taste.”

SIWA President Terri Hartman expressed the hope that the organization could draw attention to the Gangwon area. “I hope our event helps reignite the interest in the DMZ and helps drive a tourism boom that will improve the regional economy,” she said.

The journey to the DMZ was jointly organized by the Buddhism broadcasting system, NAMU Art.

“I once taught zen meditation to a number of embassy workers, ambassadors and spouses,” said Hah Hoon, the president of the broadcasting company.

“From then, I developed a relationship with them and thought it would be meaningful to have them visit the DMZ and hold events to promote peace in the region.”

As Hah’s involvement indicates, one of the highlights of the tour has to do with religion.

A group of priests, monks and bishops of Won Buddhism (Korean school of Buddhism) and Cheondoism along with SIWA members headed to a DMZ observation deck about four-tenths of a mile from North Korea’s guard post to express their hope for peace.

The group included the Rev. Kim Dae-seon, head of the Won Buddhism Parish of Pyongyang; Chu Nak-kil, director of Claretian Missionaries; and the Rev. Chin Bang-joo, director of the information and research department at the Presbyterian Church of Korea.

“We are now standing at the DMZ, where we can see a North Korean Post,” the religious leaders read from the “Declaration of Peace.” “Here is a place where the soldiers of South and North Korea aim their guns against each other. But we should forge ahead, hand in hand, toward reconciliation as the whole world looks to bring peace.”

“While extreme tension exists on the Korean Peninsula, the two leaders of the South and North need to have a dialogue and show understanding for each other.”

The delegations also called on the international community to play its part in defusing tension.

“We desperately urge the international community to help ease the crisis on the peninsula. The current confrontation between the two Koreas has deepened the conflict in Northeast Asia.”

Kim Dae-seon of Won Buddhism stressed it’s important for religious leaders to engage in activities meant to promote peace. “We have long worked together in various fields and we acknowledge that we can play a part in enhancing ties with North Korea,” he said.

Later, participants moved on to Geonbong Temple and joined a temple stay followed by dinner and an evening concert.

The following morning, they strolled along the east coast and enjoyed breakfast together. At 10 a.m. the group climbed Mt. Seorak, where they enjoyed Zen meditation and other cultural events prepared by the organization.