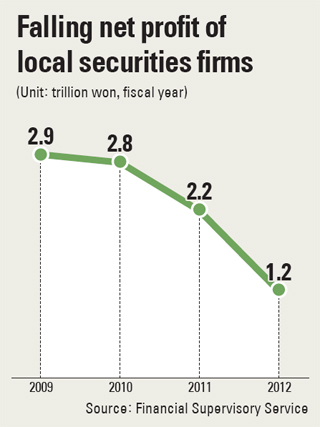 Net profit was hurt by “continuing uncertainty in the financial market triggered by the euro zone crisis that led to a global economic slowdown,” said an FSS official.

“Though securities firms have been putting out efforts to increase their profit by slashing the number of employees and branches, profit hasn’t improved much,” the official said.

In recent years, local brokerages have struggled to boost profitability by streamlining their businesses. As of March last year, securities firms had 1,768 branches; this March there were 1,590. The number of employees at firms dropped from 43,820 to 42,317 over the same period.

To survive, experts say, brokerage firms must diversify, for example, by enhancing their asset management business.

In addition securities firms, other nonbanking financial institutions have seen their profit plunge recently. In addition, the combined net profit of seven credit card firms was down 14.5 percent last year compared to 2011, according to the FSS.