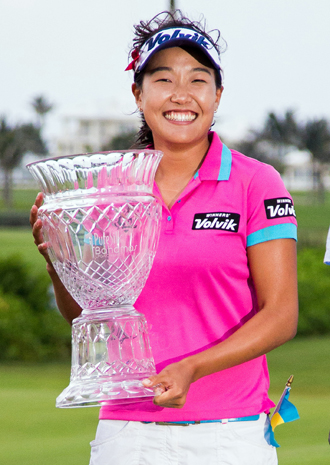 PARADISE ISLAND, Bahamas - A week like no other on the LPGA Tour ended in a most appropriate manner Sunday when Lee Il-hee won for the first time.

Lee made a clutch par putt on the second-to-last hole in a raging wind to keep a one-shot lead, and then she drilled a fairway metal out of the light rough and onto the par-5 18th green to set up a two-putt birdie. That gave her a five-under 42 for a two-shot win over Irene Cho in the Bahamas LPGA Classic.

Lee has come a long way since her rookie year in 2010, when she earned her card at Q-school and spoke “zero English.” She decided to stay in private housing to help learn the language. And after a short interview before the trophy presentation, she smiled and said, “I think I did OK right now.”

Lee, who tied for third at Kingsmill for her best finish this year, set modest goals when she arrived at the course and saw flags rippling hard in a wind that only grew stronger.

“I was thinking four under for the day,” she said. “I saw the wind blowing super hard and I changed my goal - maybe even par. And then I birdied the first hole, the second hole, the third hole. And then, maybe this is the day.”

It certainly was. She played bogey-free in a wind that was far stronger than what Cho faced, and Lee was all smiles as she walked off the green. She carried a small Bahamian flag.

It was only fitting that she finished in a downpour. Flooding earlier in the week left so much of the Ocean Club course underwater that the tour’s best option was to shorten the course to 12 holes and play three rounds to reach the 36 holes required for an official event.

The most sensible routing was a strange one. Every player started on No. 10 and then jumped from one side to the next. The course dried enough that the par-5 18th was used for the first time all week, and the fourth hole - which had been converted from a par 5 to a par 3 - was eliminated.

Lee birdied her opening three holes Sunday to quickly catch Paola Moreno at nine under, and she added a birdie on the 14th to take the outright lead.

Cho, who teed off two hours before Lee, got into the mix by holing a 9-iron into the wind from 118 yards on the par-5 11th hole - the fifth hole of her round - and birdied three of the last five holes for a seven-under 40. The seven under matched the low score of the week.

Anna Nordqvist had a two-under 45 to finish alone in third. Cristie Kerr, coming off a win in Kingsmill two weeks ago, was in position for so much of the day and couldn’t make a putt, the strength of her game.

She even laid flat on her stomach for a seven-foot attempt on her ninth hole, only for it to bump off line. Kerr had to settle for a 46 and a five-way tie for fourth that included Paula Creamer (45) and Mika Miyazato (45).

Cho’s eagle from the 11th fairway was but a small part of her exciting round.

Two holes later, her shot drifted onto the sandy beach and she figured she might as well try to play it.

“It was in the beach, and there was some water around it,” Cho said. “And I was like, ‘Shoot, I’m going to pull out a little Bill Haas and just try to get this up and over.’ I got it out perfect.”

She saved par, just like Haas did in a playoff at the Tour Championship in 2011 that led him to win the FedEx Cup.

As hard as the wind was blowing over the final hour, and as the sky began to darken, it looked as though Cho’s score of a nine-under 128 might be enough to win. Lee was simply flawless.

She looked to be in trouble on the par-4 eighth along the ocean - the 11th hole in the rotation - when her approach rolled back to the fringe and her lengthy birdie putt stopped about five feet short. The par putt was true, and Lee lightly pumped her fist as she walked off the green with a one-shot lead.

The 18th was playing downwind, and her second shot tumbled onto the green to lock up her first LPGA Tour win.

It is the fifth victory by a Korean golfer on the LPGA this year, Park In-bee won three times and Shin Ji-yai won once.