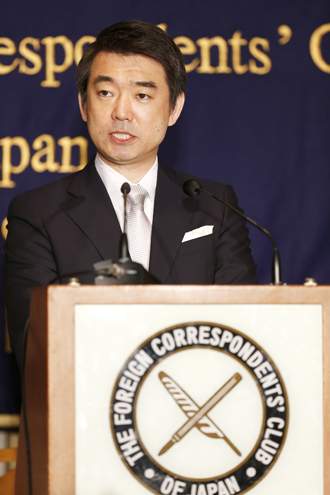 Osaka Mayor Toru Hashimoto tried having it both ways yesterday by claiming the press distorted his May 13 remarks that Japanese soldiers needed the sex slaves from Korea and other countries they exploited during World War II.

He also expressed a “heartfelt apology” for Japan’s “past offenses” yesterday at a meeting at the Foreign Correspondents’ Club of Japan in Tokyo.

But at the same time, he said the so-called “comfort women” had already been compensated under a 1965 treaty, and if there were any unresolved issues Korea could address them in the International Court of Justice.

The Korean Ministry of Foreign Affairs responded yesterday that Hashimoto and other Japanese politicians’ careless words denying historical aggression will further isolate Japan and hinder exchanges between Seoul and Tokyo.

Hashimoto, a rising political star, has faced an international backlash for stating that comfort women, or Asian girls and women forced into sexual slavery during World War II, were “necessary” for soldiers to release their pent-up energy, and also for urging U.S. soldiers based in Okinawa to take advantage of the legalized adult prostitution industry in Japan.

The outspoken co-leader of the newly founded Japan Restoration Party, who is often described as a potential prime minister for the future, was all over the map yesterday as he prepared for his meeting at the Foreign Correspondents’ Club of Japan. Before the meeting, he released a statement.

In a lengthy statement ahead of the meeting, Hashimoto stated, “Nothing is more regrettable than a series of media reports on my remarks with regard to the issue of so-called comfort women.”

Hashimoto expressed a “heartfelt apology” for Japan’s “past offenses,” but emphasized that other nations also need to acknowledge “their soldiers violated the human rights of women” and that Japan is not to blame alone in regards to prostitution during wartime.

Regarding calls for compensation of the comfort women, he said Japan has already addressed the issue and he proposed Korea takes up the issue with the International Court of Justice - which is what the Japanese government has proposed Korea do over its claim to Dokdo, which Tokyo also claims. Korea effectively controls Dokdo.

When Hashimoto finally entered the Foreign Correspondents Club, some 300 reporters were gathered, showing the intensity of the interest internationally. He repeated some of the points of his earlier written statement and apologized for saying U.S. troops should patronize the legal sex industry in Japan.

“I understand that my remark could be construed as an insult to the U.S. forces and to the American people,” he told the reporters.

Hashimoto said his intention was to “prevent a mere handful of U.S. soldiers from committing crimes,” suggesting that U.S. military personnel deployed in Japan were capable of committing sexual crimes if they did not take advantage of prostitutes. He said he was concerned of past cases of sexual assault by U.S. soldiers on Okinawa.

However foreign reporters grilled Hashimoto when he stated that the 1993 Kono Statement did not make it clear that the Japanese government was directly involved in “human trafficking” of sex slaves, though he did acknowledge that the Japanese soldiers used comfort women, which infringed upon human rights.

“If he were to say such things in the United Nations General Assembly or the United States Congress, what kind of reaction would he get?” Yun asked. “He is only doing damage to Japanese who have common sense, and it’s in the best interest of himself and the Japanese people with common sense that such careless words are not repeated.