In Berlin, a new show provokes via sculptures

In Berlin, a new show provokes via sculptures 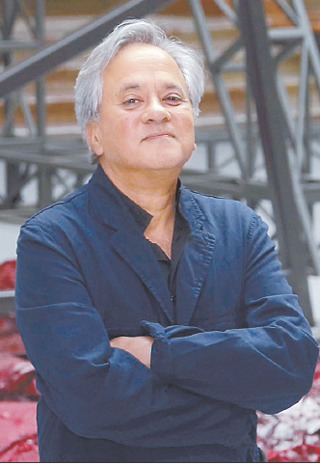 Indian-born British artist Anish Kapoor poses in front of his “Symphony for a Beloved Sun” (2013) during a media preview of the exhibition “Kapoor in Berlin” at the Martin-Gropius Bau, in mid-May. The exhibition will run until Nov. 24. [REUTERS/NEWSIS]

BERLIN - Blood-red bricks of wax are shifted by conveyor belts up metal chutes toward the center of an atrium before thudding down and splattering like entrails, in a monumental installation created by artist Anish Kapoor for his new show in Berlin.

A giant, dark sun-like red disk hovers above the ever-growing heap of wax splodges in “Symphony for a Beloved Sun,” which opens Kapoor’s first major exhibit in Berlin, running until Nov. 24 in the Martin Gropius Bau exhibition hall.

“Kapoor in Berlin” includes works the Turner prize-winning artist has created specifically for this show as well as a selection of provocative sculptures dating back to the 1980s, made with wax, steel, resin, stone and mirrors.

The artworks range from frightening installations like “Symphony” - which recalls the industrialized murder of six million Jews during the Holocaust - to playful curved or geometrically fragmented mirrors which one might find in an amusement park.

“It refers to the history of this place, obliquely to the Holocaust, and to Russian Constructivists,” British curator and art historian Norman Rosenthal told Reuters. The Gropius Bau is housed in an elegant neo-Renaissance pile destroyed in World War II and reopened in 1981. It is located next to the former site of the headquarters of the Gestapo, Nazi Germany’s murderous secret police.

From the windows, visitors can glimpse a stretch of the Berlin Wall that divided western and communist eastern Germany throughout the cold war.

“You can see each of those red bricks as incorporating the innards of dead spirits - and there are lots of them in this part of the world,” said Rosenthal.

Kapoor, who speaks with an upper-class British accent, is one of Britain’s most renowned contemporary sculptors and created the country’s biggest piece of public art with his controversial, ￡22 million ($33 million) spiralling red tower for London’s Olympic Park.

But the artist was born and raised in India to an Iraqi-Jewish mother and a Hindu father, and spent a brief period in Israel aged 16 living in a kibbutz before settling in Britain.

“Inevitably [the installation] does have some relation to this site, to this city, to this country, to its history,” Kapoor said.

One German paper noted that the Swastika symbol adopted by the Nazis signifies the sun in some civilizations and in the Hindu tradition is a symbol for good fortune.

The 59-year old, who sported a casual blue suit, red sneakers and floppy silver hair, said that he did not want to convey a narrative or statement with his work. Rather, the process of the artwork should yield a deeper meaning.

“I was born and brought up in India, my work is Indian and not Indian,” he said. “Similarly, Jewishness is one of those things that is present as a reality but it’s not something I directly draw upon.”

The show includes some of Kapoor’s classic works such as “Shooting into the Corner,” in which a canon periodically fires a ball of red wax into a white corner, and “The Death of Leviathan”, a gargantuan maroon PVC balloon.