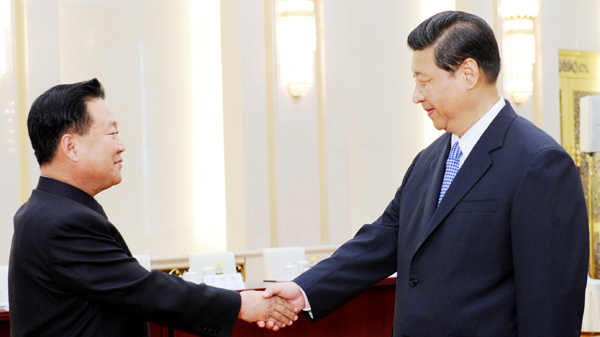 The visit by North Korea’s Vice Marshal Choe Ryong-hae, director of the General Political Bureau of the Korean People’s Army, to China last week has been hailed as the latest in a series of snubs by a Chinese government that is angry with North Korea’s recent bouts of belligerent behavior. This anger, newspapers speculated, was apparent in Choe’s being made to wait a couple of days in Beijing before he was given an audience with Xi Jinping. Xi’s stern words at the Boao Forum in April also were said to irritate the North when he said, “No one should be allowed to throw a region and even the whole world into chaos for selfish gain.”

China’s anger is apparent not just in words, pundits speculate, but in actions like the Bank of China’s severing ties with the North Korean Foreign Trade Bank earlier this month. Secretary of State John Kerry’s confident statements in April reinforced the impression that China and the United States are finally on the same page regarding the North. These developments are all supposed to be manifestations of new thinking emerging from Beijing that was epitomized in a Financial Times opinion piece shortly after the North’s third nuclear test in February 2013 by scholar Deng Yuwen, calling for China to cut its ties with the regime.

These are undeniably positive changes in China’s otherwise lackadaisical attitude toward the North and represent a mood that is less magnanimous in countenancing Pyongyang’s bad behavior. But given past patterns of Chinese behavior, we should remain cautious about celebrating a new turn in China’s policies on the Korean Peninsula. There are three tests of whether things are really different this time with China.

The first real test of whether China is serious in cracking down on North Korea is whether it maintains the North Korean Foreign Trade Bank sanctions indefinitely. Sanctioned by the Bank of China last month, this North Korean financial entity was not on the original sanctions list in the UN Security Council resolution after the February nuclear test. It was omitted largely because China worked hard to prevent such vital DPRK entities from being included on the list.

Why does this matter if China is already sanctioning the bank now? Because China is technically under no obligation to maintain these sanctions as mandated by the UN. This means that it can later choose to remove the sanctions and not be in violation of a UN resolution. If China truly has a new get-tough attitude, then it would maintain these financial sanctions if and when there is a resumption of the six-party talks. If it simply lets them quietly disappear as a quid pro quo for Pyongyang simply showing up at another round of meaningless talks, then little will have changed in Chinese attitudes.

The second test is whether China continues construction on the new bridge at Dandong. This is arguably the most important project today for Beijing-Pyongyang relations. The new 1.9-mile bridge is designed to augment the old, dilapidated one which now bears most of the commerce across the border to Sinuiju.

This Dandong-Sinuiju connection carries some 70 percent of total trade between the two countries. Construction started in late-2010 and the $356 million project is scheduled to be finished in 2014.

It will be a testament to the enhanced economic interaction that has grown between the two countries since 2008 when China signed a bunch of contracts to extract minerals from the resource-rich North to fuel China’s two inland provinces, Jilin and Liaoning. China also plans to build a new ore terminal at Dandong port. As far as we can tell in the open-source literature as of early-May, China has not stopped construction of this bridge. This is discouraging news.

The third test of changed Chinese attitude toward North Korea is whether Beijing extends an invitation for a visit by Kim Jong-un in the next month. Clearly, this must have been one of the purposes of Choe’s mission to Beijing last week that was lost amid all of the press speculation that Choe somehow was given cool treatment by his Chinese interlocutors.

Since President Park Geun-hye is headed to China at the end of June, Beijing will be under pressure to allow the young Kim to enjoy a summit as well. In fact, not once in recent history has China allowed one party to visit, without also allowing the other (in North Korea’s case, usually accompanied by some economic gifts like food, energy or other goodies).

Indeed, in the aftermath of the 2010 Cheonan sinking and Yeonpyeong Island shelling, China embarrassed then-President Lee Myung-bak by allowing a visit by Kim Jong-il, when Lee had explicitly requested that such a visit not be granted given the North’s outrageous provocations.

Choe’s visit almost certainly was meant to set up Kim Jong-un’s first summit to China as head of state in the near future. South Korea must be wary of this eventuality. China is unlikely to deviate from its equidistance policy on the peninsula, and may fail the test of President Park’s trustpolitik.


*The author is D.S. Song-KF professor at Georgetown University and senior adviser at the Center for Strategic and International Studies (CSIS) in Washington.