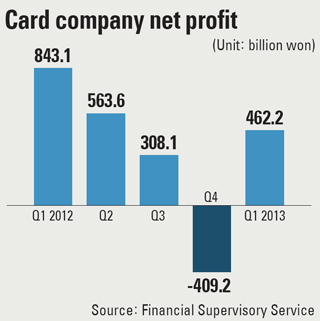 Data from the Financial Supervisory Service showed that from January through March, net profit of seven local card firms was 462.2 billion won ($409.9), down 45.2 percent from the previous year’s 843.1 billion won.

Compared to last year, card firms’ profit from stock investments dropped by 406.9 billion won in the first quarter this year and profit from card business including commissions also dropped by 28.7 billion won.

At the time, the card companies were criticized for charging too much in fees to stores that receive payments from customers using credit cards.

“The drop in profit wasn’t as high as it might have been because card firms voluntarily reduced spending on marketing,” the official said.

The net profit of KB Kookmin, BC and Hana SK Card increased in the first quarter year-on-year while net profit of Shinhan, Samsung, Hyundai and Lotte declined.

Seven local card firms’ delinquency ratio, meanwhile, was 2.11 percent on average in the first quarter, up 0.26 percentage point compared to the fourth quarter of last year.