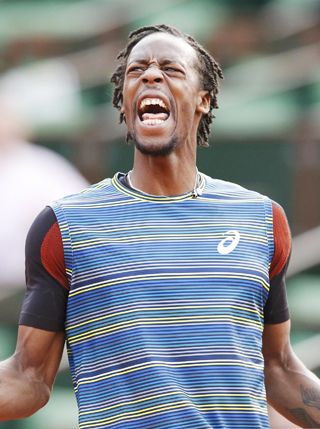 Gael Monfils of France reacts during his men’s singles match against Tomas Berdych of Czech Republic at the French Open, Monday. [REUTERS/NEWSIS]

PARIS - Wild card Gael Monfils confirmed there is never a dull moment when he takes part in the French Open by upsetting Czech fifth seed Tomas Berdych in a first-round marathon at Roland Garros on Monday.

The Frenchman, whose career has been recently plagued by a knee injury, prevailed, 7-6, 6-4, 6-7, 6-7, 7-5, in front of an ecstatic Court Philippe Chatrier after four hours, three minutes.

The result marked a spectacular reversal of fortune for Berdych, who reached the Madrid Masters last four by beating world No. 1 Novak Djokovic in the quarterfinals.

Former world No. 7 Monfils, who started his freefall in the ATP rankings when he pulled out of last year’s French Open, is no stranger to upsets and prolonged ties at his home slam.

In 2010, the Parisian played into the night, until almost 10 p.m. against Italian Fabio Fognini in a second-round match which he lost the next day after more than four hours of tennis.

Two years ago, Monfils toyed with David Ferrer’s nerves and beat him, 8-6, in the fifth set to reach the last eight.

In 2009, it was Andy Roddick who lost his temper, complaining to the umpire that it was too dark to play and, after both were forced to continue playing, Monfils sealed a fourth-round win in straight sets as dusk settled.

On Monday, Monfils did not wait for the dark.

“It’s magical here, it’s a place where I feel good, where I manage to transcend myself,” Monfils, who saw off four break points in the decider, told a news conference.

Asked how he pulled it off, the Frenchman said: “My only answer is I worked. I worked. And I believed in myself.”

The result capped a good day for Frenchmen as Richard Gasquet, Jo-Wilfried Tsonga and Julien Benneteau also advanced into the second round.

Meanwhile, Daniel Brands ensured it was no regular Monday at the office for Rafael Nadal when the Spaniard came desperately close to being shown the door after walking on to Chatrier Court to begin his hunt for an eighth French Open title.

Nadal reached the second round but his 4-6, 7-6, 6-4, 6-3 win over the inspired German, who had never won a main-draw match at Roland Garros before, was fraught with danger as the 11-time major winner flirted with the unthinkable.

Women’s defending champion Maria Sharapova’s only concern was a late court switch, though, as the Russian completed a businesslike 6-2, 6-1 victory over Taiwan’s Hsieh Su-wei.