Master of meditation offers words worth thinking about

Master of meditation offers words worth thinking about 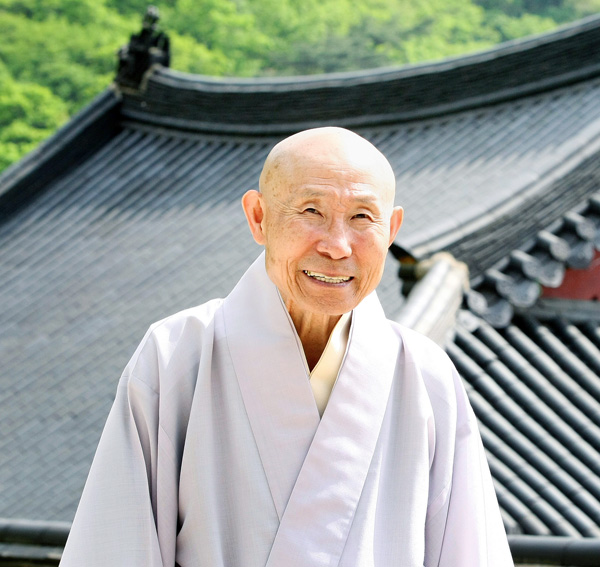 With Buddha’s birthday celebrated on May 17, it was again time for many to reflect on the 2,500-year-old teachings of Shakyamuni.

Buddha, or Shakyamuni, didn’t have to look too far to find what was important in life. He believed in “ilchejungsaeng gaeyoobulseong,” or “everything that has life has potential to become like Buddha.” In other words, everyone is free to try to become enlightened. Such teaching resonates in today’s society, where people feel the pressures of living in a highly competitive environment.

It’s an encouragement to many, and it explains why meditation and other Buddhist practices are on the rise. Since 2002, when temple stay was introduced, there has been a 30 percent increase annually in those who participate. Last year alone, more than two million people took part.

One of the most popular of pilgrimages is to Chooksersa, located on the outskirts of Mount Munsu in Bonghwa County, North Gyeongsang.

At this temple, there is much emphasis on practical Zen meditation techniques. Seon, or Zen, the realization of one’s immaculate Buddha nature is the focal point of happiness.

Every third weekend of the month, there is an all-night Zen meditation session in which 120-150 people take part. This has been going on for the past seven years. Practitioners from Seoul and Gyeonggi, and as far away as Busan, Daegu regularly attend.

Of late, there has also been an increase in the number of middle-aged professional men, physicians, lawyers and others. Even Christians are known to take part. The temple doors are open to all, and to explain just why, the head monk, Venerable Muyeo talked to the JoongAng Ilbo. 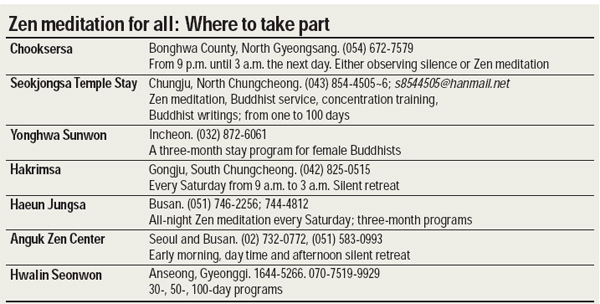 Muyeo studied economics at university and worked full time before becoming a monk. He entered Chooksersa in 1987, when the place was practically unknown. For the temple to become scenic and a “good place to meditate,” as it is now known, Muyeo’s wise words played a significant part. He is best known for being a follower of ganhwa seon, or word contemplation meditation.

Q. What is the reason for allowing non-Buddhists to take part in meditation sessions and the like?

A. After becoming a monk, I spent 20 years roaming around the country. I devoted all to meditation, especially the notion of hwadu (a keyword or phrase that is isolated for constant investigation throughout one’s waking moments during meditation). And by doing so I felt the need to clear my mind. I decided to live my life for mankind rather than being fixated on Buddha. After all, Buddhism is not a religion that instructs monks to worship.

The temple is very far from cities. Did you know that people would come regardless?

I didn’t think that the location would be a problem. Whether in the city or the country, it’s the devotion and heart that is important. The place is not so important.

Is Zen meditation really helpful in the everyday lives of people?

It’s not a question of whether you should take part in Zen meditation or not. You have to, because if you don’t you miss out. These days people are obsessed with money, but money itself is a source of misery. You must fuse money with Zen for money to make you happy. It is through Zen meditation that you can feel happiness, contentment and optimism. I’m not exaggerating.

Is it possible for average people to feel this way?

Of course, but you have to want it in earnest and follow through diligently. Anyone can feel the tranquil happiness that is the result of Zen meditation. There is no rank within enlightenment. That’s the crucial element in Buddhism.

In your book “Rest, Rest and Rest” you don’t insist on relying solely on hwadu Zen meditation.

I noticed that a lot of people found hwadu-based Zen meditation difficult. Most of these people don’t actually put their heart into it.

But from their point of view, I looked at what meditation is, and tried to teach them so they feel the effects right away. Proper breathing techniques, vipassana meditation, along with chanting, all these help in mastering ganhwa seon (word contemplation meditation).

What are some effects of yombul seon (chanting meditation)?

If you do it properly, in hours you are able to feel tranquility and happiness. You breathe in and out and then say “Seokgamonibul” (Sakyamuni Buddha). As you linger over the syllable “bul,” your mind will become clear.

When you get a taste for Zen and yeombul seon (chanting meditation), you can even become aware when someone is watching you. That’s when hwadu becomes important. It’s a practice that is easy to pick up for busy people. The all-night meditation sessions held at Chooksersa began in 2007 through the Unitel Buddhist Club. It recruited members far and wide before venerable Muyeo was asked to head the sessions. Today, more than 70 percent of the participants are regular participants, while more than 10,000 have mediated at the temple.

What do you think would happen if North Korea embraced Zen meditation?

If North Korean began Zen meditation, then they wouldn’t be fooling around with nuclear bombs or fixated on the idea of altering the world.

Even if you aren’t a follower of Buddhism, if you invest 10 minutes in Zen meditation, the results would be astounding. It’s a time to look over your true self, reflect and feel joy from having a calm and composed mind. Whether you call that meditating or Zen is not important.