Missing the SATs can be worse than taking them

Missing the SATs can be worse than taking them 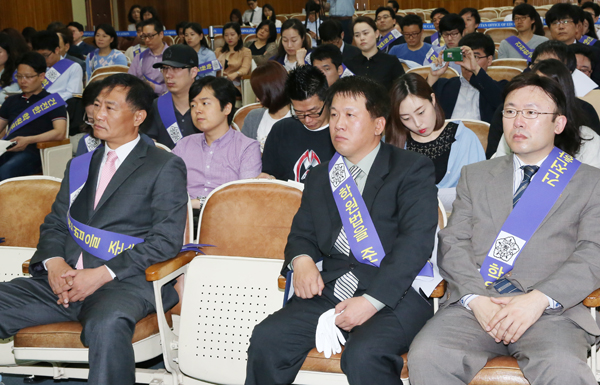 A group of SAT prep school directors gathers yesterday at the Seoul Metropolitan Office of Education in Jongno District, central Seoul, for a workshop and pledges not to leak questions, drive students too hard, or make false or exaggerated claims in advertisements for their hagwon. They also requested that the municipal office reveal the names of tarnished hagwon to protect their reputations. Provided by Seoul Metropolitan Office of Education

For high school juniors bound for U.S. colleges, almost nothing is as important as the SATs, the college admissions test. So what happens when the exam gets canceled throughout your country?

David Cho, 17, thought he had mapped out his junior year. He was one of some 1,500 students in Korea slated to take the May SATs. He planned to take them again in June if he needed to improve his scores. That left him free over the summer to prepare for three SAT Subject Tests, or SAT IIs, in October, and start working on his college applications.

Cho’s plans crumbled after a series of SAT cancellations, beginning with the SAT General Reasoning Test cancellation in May, the first time it has been canceled for an entire country.

Cho first heard the news through Facebook on April 30, four days before the scheduled exam date. He thought it was a stupid rumor until the next day when he received an official e-mail from the College Board, the test administrator.

“We were frustrated when we found out,” Cho said, voice strained. “Many of us had finals to study for and AP [Advanced Placement] exams to prepare for, on top of school and extracurricular activities. We sacrificed a lot of time to prepare for the SATs.” The AP exams are college-level curriculum programs also administered by the College Board and take place in May nationwide.

Some students, afraid of further cancellations in Korea, signed up for the June exams in Japan. When the best test locations in Japan filled up, some signed up for places in Hong Kong.

On May 18, the SAT Biology Subject Test exam for June was canceled in Korea. Then, last Saturday, some Korean students were notified they will be barred from taking the exam in Korea or any other test centers.

The reason was the same for all three cancellations: test questions were obtained and allegedly leaked by certain hagwon, or cram schools, based in the posh, educational neighborhood, Gangnam District in southern Seoul.

Cho has now ruled out the option of applying early decision to colleges because he’s running out of time to get everything done.

Some of his friends opted to take the exam in Japan, but Cho is dubious. “If the College Board can cancel the exam for students in Korea, what’s to say that they won’t look at our addresses and keep us from taking the exam in another country?”

The SAT cram schools in Korea are not the standard prep courses which usually involve a couple of months of instruction in mock SAT questions.

They are elite, exclusive test-cracking institutes that make enormous profits and are based mostly in the affluent Apgujeong and Gangnam area. Parents pay between 10-20 million won ($8,870-17,740) a month to enroll their kids. They often require upfront cash payments. Some enroll with fake names to protect their identities.

And the cram schools sometimes really deliver, providing the students with actual questions that will appear on upcoming SAT tests allegedly stolen from testing centers outside of Korea.

And some students, after paying all that money, still bomb the SATs. Refunds aren’t given.

The reason for the cancellation of the SATs in May, according to the College Board, was “information provided to the New Jersey-based Education Testing Service, or ETS, the College Board’s vendor for SAT test administration and security, by [Korea’s] Supreme Prosecutors’ Office” regarding tutoring companies in Korea that are “alleged to have illegally obtained SAT and SAT Subject Test materials for their own commercial benefit.”

It said the same thing about the cancellation of the biology test.

In February, Korea’s Supreme Prosecutors’ Office raided eight test prep hagwon in Gangnam on suspicion they were using leaked test material and selling questions from SAT tests they got from Southeast Asia. Two had their operations suspended and six others were fined 12 million won each.

After the College Board canceled the examination in May, the Seoul Metropolitan Education Office said it would investigate more than 60 SAT preparatory institutes in Korea, especially those in Gangnam, known as the institutional education center of Korea. An investigation team would conduct on-site inspections throughout the month and special tax audits were ordered.

On Saturday, the office said around 12 SAT hagwon suspected of leaking test questions will be inspected this week and will be banned from accepting new students and from opening new SAT classes until the prosecution’s investigation is completed. It added that hagwon will be shut if they are found to have ever leaked SAT questions.

The education office said it will expand the inspections into all SAT hagwon in Seoul between June and August, the peak period for students taking SAT classes during summer vacation. A Seoul Education Office official said he regretted that these hagwon “tarnished the national image of Korea and affected innocent applicants as well.”

For over a decade, Korea has had the third-highest number of students studying in the U.S. following China and India.

The U.S.-based Institute of International Education says there were 72,295 students from Korea studying in the U.S. in the 2011-12 school year, nearly a 37 percent increase from a decade ago. Of those Korean students, 52.9 percent were studying in undergraduate programs and 30.7 percent were graduate students. The balance were younger than college age.

According to the institute, Korean students going to the U.S. consistently increased through the 1980s and 1990s, decreased slightly in the late 1990s due to the Asian financial crisis, then rebounded as the economy recovered. In 2001-2, Korea moved ahead of Japan to rank third.

In 2012, Korea had 154,178 students studying abroad, according to Statistics Korea, and nearly half headed to the U.S.

This was not the first standardized test cheating scandal for Korea.

Some 900 SAT scores were canceled in Korea in 2007 when brokers were found to have hired people to sit through the test and record or smuggle out questions. Korea has had a problem with leaked Teaching of English as a Foreign Language, Toefl, questions in the past as well, with hagwon employees sneaking out questions through recording devices or through memorizing portions of the test.

“It’s true that cheating occurs in other countries, but it happens to an extreme extent in Korea,” a Korean Ministry of Education college admission division official said.

“In the case of the CSAT, that is a state-level examination where students simply cannot cheat, and there haven’t been any cases of cheating because the exams are secured and locked away, police cooperate with the administrators and test-takers’ cellphones are taken away. But unless the SATs are administered by the state, that won’t be possible.”

Each year, new questions are written for the CSAT, or College Scholastic Ability Test, the domestic equivalent of the SAT college entrance exams taken once a year in November, and even on the day of the exam, the papers are guarded.

But SAT exams are recycled from a pool of questions, said an ETS official. Hence, SAT questions can reappear on later tests.

The College Board was not available for comment, but the ETS official said, “As long as test questions continue to get leaked, there may be a chance that future exams will get canceled.”

The already-stressed college-bound juniors don’t know where to turn now.

“Many students initially found out about the SAT cancellations through hagwon,” said Jina Yoo, 16, a junior who was slated to take the SAT II Biology exam in June. “I personally thought another test wouldn’t be canceled after the May SATs.”

She remembers the day vividly because she first heard the news through an instructor at her SAT cram school. The College Board sent her an official e-mail the next morning.

“The SAT Biology exam is considered one of the most difficult subject tests,” Yoo continued. “Not many students take that particular test.” The next exam date for the subject tests is not until October, five months away. “I just have to study and review the material I studied for AP Biology over the whole summer.”

Hagwon insiders say there are various methods through which the SATs are cracked, such as hiring test takers with photographic memories to memorize questions, employing brokers to buy tests from other countries and also running statistical databases on questions recurring.

Rumors circulated after individual Koreans were banned from taking the tests that people over 20 were the focus because they were more likely to be professionals hired by hagwon rather than students.

“One of my friends was sent such a notice barring him from taking the June exam,” a student said. “He said he wasn’t enrolled in any of those hagwon being investigated. But who knows?”

Meanwhile, schools and guidance counselors are bracing for this fall’s college applications.

“The students were in quite a state of panic,” said Jonathan Taylor, a faculty member at the North Collegiate London School in Jeju, when the news was announced of the May cancellations.

“Rumors circulated that the June exam was going be canceled as well, and some students went so far as to make plans to fly to Japan or even Hong Kong,” said Taylor. “But it’s a trying experience and traveling by plane and staying in a hotel adds another layer of difficulty.”