A file photo of Sinwolseong nuclear power plant in Gyeongju, North Gyeongsang. The Nuclear Safety and Security Commission announced yesterday that substandard control cables were used at the Sinwolseong reactors 1 and 2 and Singori reactors 1 and 2. [NEWSIS]

Power shortages this summer became much more of a worry after the government decided yesterday to shut down two nuclear power plants after it was discovered they were using faulty components with fabricated test certificates.

The Nuclear Safety and Security Commission announced yesterday that substandard control cables were used at the Singori reactors 1 and 2 and Sinwolseong reactors 1 and 2.

In addition, performance test records on the cables were falsified.

The commission decided to halt operation of two of the four reactors - Singori 2 and Sinwolseong 1 - immediately after its discovery.

The move effectively freezes all four reactors because the operations of the other two were already halted. Singori 1 was undergoing a routine check while Sinwolseong 2 was going through an operational evaluation that would take months.

The shutdown of the two reactors yesterday puts 10 out of 23 nuclear reactors nationwide out of action as of yesterday.

According to the commission, a control cable is a key part of the safety mechanism of a nuclear reactor. When an accident happens, the cable is used to send a signal to the safety system. If it fails to work at the time of an accident, nuclear fuel cooling and leak prevention functions of a reactor will not work properly. 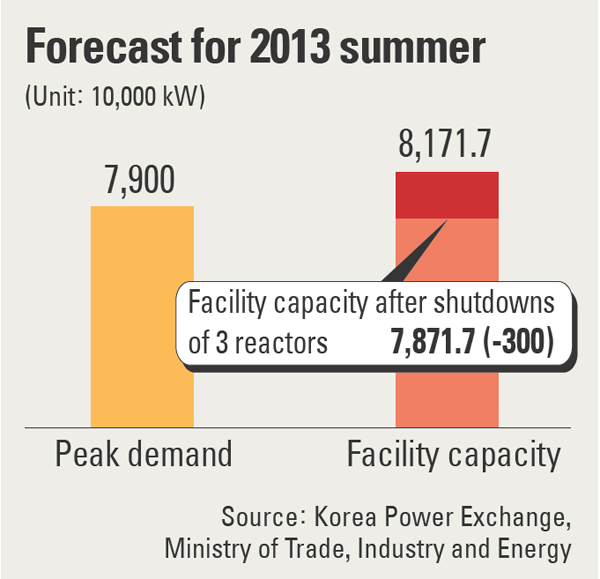 In a press statement, the commission said it ordered the control cables of Singori 1 to be replaced by extending the maintenance period. The faulty components for Sinwolseong 2 were also ordered to be changed before it was granted permission to operate.

The commission said the control cables for Singori 2 and Sinwolseong 1 were shut down immediately to be replaced.

“After the replacements are made, we will test the new control cables on the four reactors and decide whether they can resume operation or not,” the commission said. To guarantee the integrity of the new components, the commission planned to invite local residents and civilian experts to observe the replacement and verification processes.

The commission began investigating the control cables at the reactors after it received a tip in April through its corruption reporting channel.

An investigation was also done on the fabricated test certificates as well as the actual performance evaluations of the cables. After the components failed to pass the commission’s test, it decided to shut down the reactors for safety’s sake.

According to the commission, a Korean institution in charge of the tests outsourced the initial test on the cables to a foreign institute. After the initial test showed that the components failed to pass the mark, the Korean agency fabricated the data to say they passed.

The commission said further investigations will take place at other reactors. The Blue House yesterday vowed to go after irregularities in the nuclear plant industry, condemning them as hazardous to the safety of the people.

“Although nuclear plants are a very serious matter directly linked to our people’s safety, we have seen various incidents,” President Park Geun-hye said yesterday during a cabinet meeting. “The authority must lay bare the cause of the incident and who are responsible for it. If there is a problem, no matter how small it is, it must be revealed transparently, and all necessary actions must be taken to prevent the recurrence of a similar incident.”

Park also urged the Ministry of Trade, Industry and Energy to analyze electricity demand thoroughly to avoid shortages during the summer. She asked ministers to seek public support for energy saving.

The Industry and Energy Ministry yesterday hosted a press conference and admitted that there could be a severe power shortage this summer.

Although the ministry already drew up its electricity supply plan for the summer without Sinwolseong 2 because it was going to be shut down for operational evaluation, the unscheduled shutdown of three more reactors appears to have created a serious problem. The ministry earlier forecast that national power demand would hover around 79 million kilowatts this summer. It estimated available power supply could be about 80 million kilowatts, but the shutdown of three more reactors is expected to cut the estimated supply by 3 million to 77 million kilowatts.

According to the Korea Power Exchange, the highest power demand during the period between June and August is estimated at 78.34 million kilowatts this year. The forecast is higher than the total capacity after the three reactors are closed.

“From next month, there is a high likelihood of supply difficulties, and in August the situation is predicted to be very serious,” Han said.

The vice minister made a public apology for causing worries about the electricity issue.

The country had its first nationwide blackout in September 2011. Since then, the government has been ramping up its energy conservation campaigns in both summer and winter.

“Since no means to supplement the supply is available at the moment, there should be significant cuts in demand,” the vice minister said.

Detailed government measures and revised plans will be announced on Friday.

“The government’s demand adjustment efforts were quite successful last year, so similar efforts need to be made,” said Ryu Sung-ho, head of power supply and demand policy at Korea Power Exchange. Industries are likely to be told to adjust working hours and vacation schedules. The government will also crack down on excess energy use by businesses and individuals.