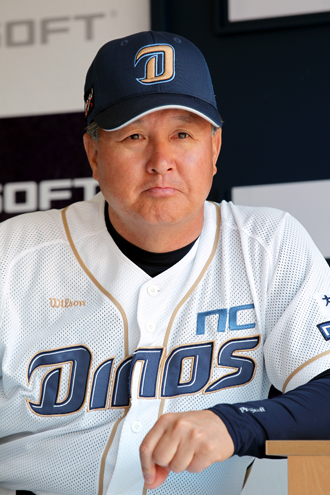 The remarkable progress of the NC Dinos is not due to the meticulous employment of tactics by the manager, but to the lack thereof, according to Dinos manager Kim Kyung-moon.

In an interview with Ilgan Sports, Kim said that his laissez-faire leadership style has been making an impact in turning around the Korea Baseball Organization’s newest team.

“How many games a year does a manager affect the result by directing bunts or replacing pitchers, maybe 15?” Kim said. “The tactics do not always succeed, so seven or eight of the games result in a loss.

“But, if you let the players do whatever they want to do and figure it out by themselves, they could win at least 40 victories [a year].

“They can catch more fish when you teach them how to fish, rather than catching fish for yourself.”

Kim indeed has tried to limit his tactics. The Dinos made 17 sacrifice bunts this season, the fewest among the nine KBO clubs. When runners are on first and second bases with no outs, many managers would make the players bunt to score a run, but Kim lets the batters hit.

It is not that he does not know how to manage. Kim took the Doosan Bears to the postseason six years during his seven-year stint with the Seoul team. He has managed 1,002 games over 10 years. Only one person, Kim Euong-yong, currently the manager of the Hanwha Eagles, has overseen more games than him in Korea.

“It hurts to see when they are retired on double plays. But, I am sure the more they have such experiences, the better judgment they will make later,” he said.

Defense has also improved. The Dinos have committed the most errors so far at 37. But, this month only, it made 10 errors, the least among the nine clubs.

Kim did not agree that his team now can stand shoulder to shoulder with other teams. But, he did agree that the team is no longer a doormat. The Dinos are one game ahead of the last-place Eagles.

“I think we have come to the point where other teams can’t easily dismiss us,” he said.